From our California Correspondent.
No. XXIV.
San Francisco, May 4, 1856.

Within the past two weeks, the grading of the San Francisco and Mission Dolores railroad has been commenced and is going, ahead rapidly. It will be only some two and a half or three miles in length, and as the route is over low ground and through sand hills, the grading is easy, and will be soon completed. There are two plank roads now connecting the two places, over which omnibuses run alternately, every half hour during the day; but it is expected that the railroad will soon supercede these in a measure. The right of way was secured, and the grading commenced, before the books were opened for the subscription of stock, or the grading contractor had given any bonds for the fulfillment of his contract. The project has been "talked off" for some time; and now all at once -California like- it is rushed into, and the first assessment of five per cent, on each share, is now being called in. This road will probably at some future time be extended to San Jose, some fifty miles.

A stranger in California, visiting; San Francisco, would be greatly surprised at the display and pompousness of most of the funerals here. Most especially is it so with the funerals of any member of the fire department. Splendid hearses, heavily hung in black, with waving plumes, followed by long trains of magnificent carriages, and procession of mourners on foot, wearing appropriate emblems of mourning, the gay flags of all the numerous engine houses displayed at half mast, and the solemn toll of the bells, characterize the mournful occasion. But a short time ago, a San Francisco fireman was not deemed to have been buried “right,” unless he was followed to his last resting place, by all his fellows, dressed in full uniform, with their "machine," torches, banner, &c., all hung with crape, and escorted by a fine band of music, performing the appropriate airs. A short time since, a German musician, of some note, died here, and was followed to his grave by a long procession of his numerous friends and countrymen, and preceded by more than sixty of the best musicians in this city, discoursing the most eloquent, mournful and impressive music.

The number of men who meet with violent deaths in California, must be considerably more than a thousand a year, at the rate these deaths are occurring here at resent. The number resulting from mining causalities, is enormously large, and will doubtless continue to increase, in proportion as the heavy and dangerous mining operations now in vogue, are extended and adopted; and those killed in this manner, are the very bone and sinew of the state. California could much better afford to lose another class of men. It is said that the deaths in the mining region, by banks and tunnels caving, exceed at this time the homicide calendar. Many of these distressing causalities are the results of carelessness, and want of judgment and foresight; but many also are unavoidable.

The withdrawal of the steamers from the Nicaragua line, has of course diverted the great mass of travel to the Panama route, and the last steamer, - the Sonora - was so crowded, that the U.S. Marshal would not let her take her departure, until he had counted the passengers, and measured the vessel; when finding no excess of passengers, he allowed her to proceed.

By the arrival of the steamer John L. Stephens, we have full accounts of the bloody conflict at Panama, on the 15th of April, between the passengers and natives, in which some thirty or more of the passengers from New York were killed or wounded. But ere this reaches you, you have doubtless had the full particulars of this outrageous massacre. It seems the natives had it pretty much their own way, killing and robbing whom they thought proper, plundering the expresses, and doing whatever damage they saw fit. But hold on; the steamer of tomorrow will carry a load of passengers down there that they will find it un-safe to molest. A great number of miners are going home at this season by every steamer, and they are always fully prepared to give any of these villains a test of the qualities of the Colt's revolver, or the Bowie knife. They are a rough set to encounter, and have seen by sad experience, the prudence as well as the necessity, of being always ready and prepared against any emergency when among the treacherous mongrel Spanish race. And the passengers by this steamer, being forewarned, will be doubly forearmed. Ah! what a pity that we had not a frigate Cyane lying there, to protect our interests at that point, and teach these Panama thieves the same salutary lesson that she taught at Graytown not long ago. And will the representatives of Uncle Sam, at Washington, look upon all this with their usual Dutch stricism? or will they lay down their pipe, rise from their easy chair, and show to all foreign nations that we are yet Americans, and will not be trampled under foot with impunity ? Whatever may have been the trivial cause of the first attack, does that justify the wholesale butchery of the Americans which followed? Were the natives justified in firing repeated volleys of musketry upon the defenseless passengers as they stood crowded and huddled together in the railroad depot, regardless of the heartrending shrieks of the women, and the cries of innocent children? It remains to be seen, whether our phlegmatic government will take immediate and prompt steps in this matter, or permit as heretofore, Americans and American rights to be trampled upon and insulted with perfect impunity. Oh, that an “Old Hickory" were once more at the helm of government, and that the great heart of the old hero again ruled the destinies of the American nation, ever ready to stand up for our rights, and prompt to redress our wrongs. Popular indignation here runs high, for among us now are wounded men and women, fresh from the bloody scene. Just let the home government say the word, and California, of her own accord, and at her own expense, would soon teach the thieving mongrel curs of Panama, a lesson of which they have long stood in actual need, and in less than six months annex to the United States about fifty miles of that territory, stretching from the Pacific to the Caribbean sea. That is just what is wanted, and the nations of the world would thank us for thus controlling the great “highway of nations," and ensuring peace and safety to the travelling millions. But let's wait and hear if Messrs. Pierce and Marcy will have anything to say in regard to this affair. 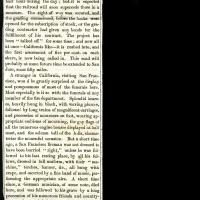