Two months have elapsed since I wrote you last not from any intentional neglect on my part but from injuries received by the “caving in” of a bank of earth – one of the many accidents incidental to a mining life. I have been confined under the doctor’s care for the past eight weeks, so pleading this as my excuse, we’ll take a fresh start. We have had less rain this summer and fall, than has been known for the past six years, therefore river mining this season is being carried forward to much better advantage than ever before and river miners are now reaping a golden harvest indeed. The system of “fluming” has been more generally adopted in the rivers this season than formerly and places which could not be worked advantageously before are now being made to “pay” well. *Note on opposite page. The whole body of the water in the river is by damming turned through long, wide, flumes, thus leaving the bed of the stream on each side of the flume comparatively dry, and capable of being worked to the very best advantage. The weather is gradually crowing cooler, winter is approaching, and the miners in the dry diggings are anxiously looking forward and wishing for rain; of course the river miners don’t want any such thing – There has been but a very small emigration across the plains this season on account of the hostility of the Indians. A train from Missouri has lately arrived by the northern route, after a long dangerous and fatiguing journey. They report having had to fight Indians a good part of the way. There were about fifty men belonging to the train nearly all well armed with rifles, and Colt’s revolvers carrying in all, over four hundred shots. Only two of the company were killed on the route but several were wounded by the Indians. A great many head of stock were shot, and stolen, and their wagons were very thoroughly riddled. The train was encamped over night in a ravine fringed with willows when they were surprised just after dark, by a large body of Indians who rushed into camp, “stampeded” the horses and drove away thirty three head of them before they could be prevented – Indeed it was so quickly done, that they hardly got a sight at the Indians at all. For eight successive days the train was attached by a body of from one hundred and fifty, to two hundred Sioux Indians. The Indians would charge at full gallop but were met with such a storm of bullets that they never succeeded in getting nearer than fifty yards of the train. Numbers of the Indians were seen to fall every day, but how many were killed, they could not determine.

So accustomed did the med become to these every day fights that they rather courted the excitement, but they became at length so exasperated by these repeated and harassing attacks, and thefts of the Indians, that when an ox was short or disabled, they killed him, and then made gashes into the flesh and filled them with strychnine, knowing the Indians would eat the carcass.

You have probably seen long ere this the election returns of this State and perhaps was somewhat surprised at the triumph of the “Know Nothings” or American Party. It is true that the population of this state is composed of a mixture of all nations, and people from every quarter of the globe, but Americans, of course, predominate, and they very generally voted the American ticket. The Whig party did not attempt anything at all & they are nowhere, they are “rubbed out,” and only known of in history. All the foreigners naturally joined with the Democratic party, it having been heretofore the ruling party of the state, and headed by Gov Bigler and a few others of those high in office, they combatted manfully against “Sam,” but the “rank and file” of the party had deserted and gone over to the enemy; and the result of the election shows conclusively that “Sam” is strong in California. *The San Francisco Herald estimates the population of California to be 350,000; 120,000 of whom are engaged in mining, including about 20,000 Chinese. In 1853 the Gubernatorial vote was 76,394 increased in 1855 to 97,693; - doing very well for such a young state. *Neely Johnson the Know Nothing candidate for governor was elected by a majority of 5,011. All the mining countries in fact nearly every county in the State, went the American ticket both for State and county officers. The election generally throughout the State was carried on in a quiet orderly manner, and the polls efficiently protected.

*It is also universally known, that far less snow fell in the Sierra Nevada mountains during the last than in any previous winder since the discovery of gold within the borders of the State. Owing to this circumstance the streams which derive their liquid supplies from these snowy fastnesses were usually low on the opening of the summer, and the miners consequently enabled not only to commence building their dams and flumes earlier than usual but to construct them the more thoroughly, and with less labor and expense than ever before. 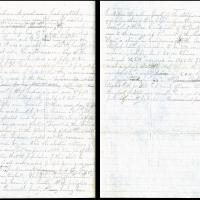