FRIEND ROCK: - I attended an Indian "fandango" the other day, and presuming that an account of the "doing" on that occasion may not prove uninteresting to your readers, I'll make it the subject of this letter.

A large party of us went together from here to the place where the fandango was held, which was about five miles from here, on the Cosumnes river, and arrived there just at dusk in the evening. Here on a small knoll or elevation of the plain, the Cosumnes tribe were dancing around a pole about twenty feet high, with a small American flag flying at the top. They were all rigged out as usual on such occasions, with a profusion of paint and feathers, and seemed to enter into the dancing with great spirit and zeal, notwithstanding that this was the third day of the festival, and they had yet another day to dance before it concluded. To a French professor of the Terpsichorean art, their performances on the "light fantastic toe" would possess less of merit than of novelty, as it consisted only of an easy hop from one foot to the other, with a sort of rolling, sideways motion, stamping flat-footed each time, all standing in a circular huddle, facing towards the centre. The old saying of "let those who dance, pay the fiddler," would hardly apply to their case, as each one was his own "orchestra," holding in his mouth a couple of whistles, about a foot long, lashed together. These were made of alder, with the pith punched out, and not being tuned to chord with each other at all, they produced a wild, novel, but yet not unpleasing sound, as they all blew together with each alternate stamp of the foot. One ridiculous look ing Digger, with a dirty face and black paint daubed on at random, and a single hawks' tail feather stuck in his hair behind, stood in the midst of the group and seemed to act as master of ceremonies, and they all kept time with feet and whistles, as he sang with a loud monotonous voice: - hi-ho-hi-hi-haw &c., a syllable at each stamp of the feet and blast of the whistles, as his delighted brethren hopped, stamped and blew most energetically. This dance or whatever you may please to call it, they would keep up with great spirit and animation for about ten minutes at a heat, when with two whirling hops and two unanimous yells, they would rest for a few minutes and then go at it again. The women of the tribe, as well as most of the men, did not dance, but only acted as spectators, or were engaged playing at "monte" near the fires. I was conversing with an intelligent young chief, who spoke English, and he told me that all those who were painted and dancing were of the "medical" order; and he pointed out several whom he said were "big medicine men"—“big doctor."

This is what they term the "Medical" festival, and usually lasts four days, in which the neighboring tribes join. The young chief told me that many years ago, at a "fandango" here, some of the neighboring tribes brought a kind of poison with them which poisoned this tribe, making them all "much sick;" since then, he says the "doctors" of this tribe have found out that poison; therefore, being equal to them, they can safely defy them and their poison. On the morrow, he said, the other tribes would come in and join in "big fandango." This festival or "fandango," is in commemoration of the time of the poisoning.

About 11 o'clock in the evening, the dancing ceased for the present, and several sick children were brought into the group for the "big doctors" to "operate" upon, which they did in the following manner: - They gave the child a small piece of a certain kind of root to chew, and then on their hands and knees, applying their lips to the naked breast, side or back of the child, gave a long suck, as though they could "extract" the disease in that way; then turning aside, they would spit and gag most ridiculously, making violent but unsuccessful efforts to vomit, from the supposed effects of the mouthfuls of disease they had thus extracted. They continued this operation for about half an hour. What might be the Hygerian effect of such a course of treatment, I felt hardly competent to say, but perhaps some of our medical friends in Plymouth may understand the philosophy of it, and avail themselves of it in their future practice.

After this performance was over, we looked about for a place to sleep, and finding a large haystack about a mile farther up the river, we monopolized it, sixteen of us in all, and slept soundly till morning. At sunrise next morning we went back to the scene of operations, and shortly afterwards the Indians commenced dancing again, more spirited than ever. "Old Santiago," their chief, with no other article of wearing apparel besides a pair of rather short pants on, was making himself pretty busy, keeping the squaws and white men off to one side from the space allotted to the dancers, and all were looking out to the westward, from which quarter the other tribes were to come; and occasionally some half dozen of the "big doctors," leaving the rest of the fraternity dancing, would rush forward and throw themselves in an attitude of defiance towards the west.

About 9 o'clock the Log-Town and Mud Springs Indians made their appearance on the plain about a quarter of a mile off, and as they approached the Cosumnes Indians waxed warmer in the cause, dancing furiously, while the "great medicines" would rush forward in a very excited manner, throw themselves into the attitude of defiance and then rush back, spitting and pretending to vomit, at the very sight of their adversaries. A large flat stone, with a lot of certain kinds of dried roots upon it, was placed near the dancers and to this the "doctors" would rush, break off a small piece of the root, clap it into their mouths, and thus regain strength to face the approaching tribes. It was a curious sight indeed to view the manner of their approach. They were about thirty in number, scattered all over the plain by twos and threes, all of them creeping up, bent over and crawling in all manner of grotesque positions, with their whistles in their mouths, and painted and feathered in the most ludicrous manner. Their approach was slow, and as the foremost of them drew near, they would occasionally whirl on one heel, thus loosening a little of the hard dry earth ; then pointing with a stick or their whistles, one of the Cosumnes "doctors" would be singled out and a handful of dust thrown towards him. This had the infallible effect to drop him as though he was killed; sometimes three or four of them would be down at a time, apparently struggling in the last agonies of death, and appearing to be shot through the heart, kidneys and other vital parts, groaning and howling most piteously; but it was soon over, for they would convulsively start up, with just strength enough to stagger to the big stone, where they would take a fresh chew of root of salvation, and immediately with renewed energy rush to the front to face the enemy, again to be shot down.

It was as good as a Circus. They were all killed a dozen times apiece, but the antidotal root, by bringing them immediately to life again, enabled them to resume the attitude of defiance, and at last, as their adversaries came within reach, they rushed out, took them prisoners, and brought them in to join the dancers, which they did with right good will. This farce was repeated as long as a "foe" remained to throw dirt and be captured by the resurrected heroes. These tribes then all were united in a grand dance and whistle concert round the flag-staff. Soon the Michigan bar Indians were seen approaching. They came on just as the others had done were of about the same number and were received about the same, but with more enthusiasm, as there were more dancers, doctors, and whistlers, and two toothless old squaws stood out in front, dancing and throwing dirt with both hands towards them. They were all taken the same as the others, and when all were fairly "fraternized" and dancing fantastical and ludicrous looking beings that one could well imagine. Louder and louder blew the whistles and fiercer yet stamped the dancers as they stood all round the flag-staff, while the "big medicines" of each of the tribes all ran skipping like mad one after the other round the outside, hopping like so many big school boys, while the dirty old master of ceremonies stood in their midst singing louder than ever, with hi-hi-ho-hi- haw-hi. These were said to be all belonging to the "medical faculty." They were all dressed out alike, as far as feathers and paint were concerned, but still no two were painted or feathered alike. Each one had consulted his own artistical taste on that subject. Several of them had on no other clothing except a coat of paint and a profusion of feathers stuck in their hair, without any sort of regard to order or regularity. One big fellow was painted red all over, and had an extra set of ribs and a backbone painted out on his back in white. Another was spotted all over like a leopard or a circus clown. His face was covered with tar, and a lot of little white feathers stuck in it. Several had a lot of hawk's feathers woven into a sort of a robe, which they threw across their shoulders or tied about their waists.

The women act the part of spectators, cooks and general waiters at these festivals, and no civilized lady and her daughter ever worked harder, or made more bustle on such occasions, than do the Digger ladies of fashion in the preparation of their acorn, grubworm, grasshopper and other delectable delicacies. The dancing was kept up with undiminished ardor till about noon, when they all quit for dinner and to take a little rest, preparatory to dancing till tomorrow morning. We had seen about all that was worth seeing and therefore took up our line of march for Fort John, where we arrived in a couple of hours, well pleased with our excursion. The convention of which I spoke in my last, which was called in relation to the late tragedy at Rancheria, issued a circular throughout the county, commanding all Mexicans and Chilenos to leave this county immediately, but giving them due time to dispose of whatever property they may possess, and a committee of five is appointed in each town in the county to see this carried into effect. Another of the murderers has been taken, tried and hung at Jackson. The high sheriff of this county, Mr. Phoenix, and also the high sheriff of Mariposa county, Mr. Bowline, were both killed a short time ago in trying to arrest a gang of these same desperadoes. Politics is the staple commodity at present and the candidates for the various offices are canvassing the state. The miners are all complaining of "dry times," and lack of water in the "dry diggings" for mining purposes. But no more now, my letter is already too long, so lets close. 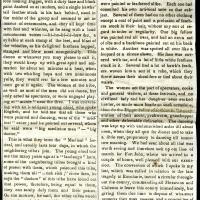