Again I greet you, but unlike my last letter, I have now to give you an account of a scene of blood. Lower Rancherie, near this place, was on Monday night last, the scene of a horrible tragedy. A murder most diabolical, inhuman, and fiendish in execution, and details ever before known in the history of California, since the days of the famous mountain bandit Jaaquin. A band of Mexican desperadoes, entered the town about ten o’clock in the evening and with pistol and knife, butchered all who came in their way. It is a small town in the dry diggings, consisting of a tavern, a store, and a few other houses, and there not being water sufficient for mining purposes, was nearly deserted at the time. The fiends attacked the tavern and store simultaneously, massacring all whom they met, their sole object being robbery and murder. Four med, a woman, and an Indian, were killed at once, and three other men were badly wounded. All made their escape who could. Mr. Dimon, the landlord, and his wife were found lying at the foot of the stairs, having probably attempted to escape by the chambers. Mrs. Dimon was shot through the heart, and probably attempted to escape by the chambers. Mrs. Dimon was shot through the heart, and probably instantly killed. Her husband is still living, but is so badly shot and cut up, that there is but a very small hope of his life. One of the boarders, by the name of Wilson, and the bar keeper, were also instantly killed. Mr. Francis, the proprietor of the store, was about closing for the night, and had just deposited his money in his safe, locked it up and put the key in his pocket, as he was shot down. The clerk was near the desk, and fell against the counter, shout through the head, and a long knife was plunged into his breast, passing completely through his body, and coming out his back. He was found behind the counter dead, and on the top of the counter, was a large pool of gore. Mr. Francis was not instantly killed, but with his right let shattered, managed in the obscurity to effect his escape by crawling out the back way, upon the hill-side back of the store, and his pursuers in following him in the dark stumbled upon an unfortunate Indian who happened to be lying out there drunk, and mistaking him for Francis, butchered him at once with their knives, mangling him horribly; they then searched him, but of course were unsuccessful in finding the key of the safe. They brought an old axe, and some other tools with them for opening the safe, but finding a lot of new axes ready handled, and pieks in the store, they took them and tried to cut a hole in the top.—They cut through the outer casing, but not being able to get through the composition filling, and the lining, they gave it up, and tried to cut off the hinges, but being but partially successful in this, they charged the key-ole with powder, blew up the lock, and succeeded in opening the safe, and took therefrom as near as can be ascertained from the best authority, about eight thousand dollars.

Most of the miner thereabouts, who had money had it deposited in this safe, and the knowledge of this money being there, was most probably the cause of this tragedy. In the hotel they took from the desk, about eight hundred dollars. They were nearly half an hour getting the safe open, and as soon as they had got possession of the money, they left, taking with them five horses from the stable near by. As near as can be ascertained, there were about twenty of the villains in all, and there were two Americans among them; all the rest were Mexicans. Some twelve or fifteen miners collected near the town from the neighboring ravines, but not being able to muster more than four shots in all, they did not deem it prudent to give battle. After the murderers had left, Mr. Francis was found, still living, but he was so badly wounded, and his leg was so shattered as to render amputation necessary, he died in consequence, shortly after the operation was performed. Mrs. Dimon leaves to little children to mourn the loss of a kind and gentle mother. They were in bed at the time, and thus escaped the reeking hands of the bloody assassins. Various and conflicting accounts are current in all the newspapers, but I visited the scene of the tragedy yesterday, purposely to get a true and correct version of this truly horrible event. I conversed with one gentle-man who was wounded, and he related to me the ingenious manner in which he made his escape. He was in the bar-room of the hotel at the time of the attack, and with several others who were not shot down at once, endeavored to make his escape, but in trying to get out of a window he was shot through his left arm, and immediately on feeling the shot, he fell back into the room, and under a table pretending to be dead.

Said he, “as I lay there, they pulled and rolled me about just as they pleased, searching for what I had in my pockets, which, thank God, wasn’t much; but what I feared most was, that they might not think me dead enough; and I was expecting every moment to feel the cold steel between my ribs.” I held my breath, and tried hard to keep my heart from beating, but if they had felt for my heart, they would have had to feel somewhere about the roots of my tongue, and then they would have found it going thump! thump!—like a big trip-hammer.” As soon as he could get an opportunity, he crawled out through the kitchen, and effected his escape. The boarders had mostly retired to their beds up stairs, out when the shooting commences, they made their escape through the windows. In the store I also saw three knives which were found about there. One was a long Chinese knife, about eighteen inches in length, much bent up having probably been used in opening the sale; another was a large, heavy knife, made of a blacksmith’s rasp; the third was a regular Texas bowie knife, and had been used to some purpose, for it was bloody to the hilt. Before daylight the alarm was spread in the neighboring towns, and in the morning large parties started in pursuit. Three of the villains were overtaken, but a short distance from the place, and were immediately taken back to Lower Rancharie, and hung to the limb of a big oak tree. When taken, one of them had some of the jewelry belonging to the unfortunate Mrs. Dimon, and another had her husband’s watch. When hung, they were placed upon a cart, with the ropes about their necks, and as the cart moved from under them, they took off their hats, swing them around, saying, “adios senores,” (good bye sirs.) Two more were taken and hung in Jackson, and another in Sutter. Six of them are dead, that we know of, and if the rest escape, they will be smart, for companies of mounted rangers are out, scouring the country in all directions, hot upon their tracks. As fast as taken they will by lynched. Civil law does not recognize them at all, and the people about Lower Rancharie say, that if they catch the two Americans who were concerned in the affair they will burn them, for hanging is too mild a death for such. Circulars are out in all directions, posted up in every town, calling on all good citizens to take immediate measures to prevent such doings in future. Delegates have been sent from all the towns to a county convention, which was held at Jackson, the county seat, last evening. The Indians have fearfully avenged the murder of their comrade, for they have killed some seven or eight Mexicans in different places near by. They seem the have taken a roving commission to kill all stray Mexicans, but measures have been taken to stop then. Since the breaking up of Joaquin’s desperate band, nothing like this tragedy has been heard of; but for some time past rumors have been received, of men being found robbed and murdered, on the public trails and highways. A short time ago the Indian diggings stage was stopped late in the evening, by four masked men, who attempted to rob, but the passengers were too strong for them, and they had to give it up. A man belonging to this place, was also chased the other evening, by three men near here, as he was returning home, but he out-ran them. The country for some time, has been comparatively quiet, and civil law has been upheld; but the desperadoes have become emboldened, and now banding together, the midnight assassins are in our midst. Once more has the civil law been laid aside, and the people have taken the administration of justice into their own hands. Vigilance committees are forming everywhere.

It is but a short time, since the legislature passed a law suppressing public gambling in this state, thus throwing plenty of Mexican “Monte dealers” and others upon the public, to make their living as best they may, and they had all rather rob and murder than to work.—All the Mexicans have been driven already from Drytown and others of the neighboring places, and the consequences of this bloody tragedy will be, that all of them will be driven from this part of the country. Means are on foot to make them do so, and they will surely have to leave. No more to present. 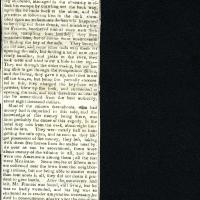