"The summer days are coming,

The blossom decks the bough,

The bees are daily humming,

And the birds are singing now."

FRIEND ROCK: - Summer is revisiting California, the word "summer" generally signifying here clear unclouded sky week after week - hot broiling sun - thermometer often up to 110 deg. in the shade and a great consequent demand for cool places and iced drinks. The hottest part of the season is not yet. August, I think, is the hottest, but it is very warm here in the mines even now, and the miners all take pretty long "noonings," enjoying their "siesta" after dinner under the shade of some sturdy oak or waving pine. A brush shade or "ramada," as it is generally termed, is also found to be quite comfortable. This is made by means of upright posts or forks supporting cross poles which are thickly covered with green bushes; it makes a cool and delightful shade, and many miners have no other sort of house during the summer season, as there is but little rain and the material for building cheap and handy. "Lee & Marshall's grand National Circus and Hippodrome" is now making another tour through the mines. They come round every four or five months and perform one or two nights in each of the principal towns and villages in the mining region. They were at Volcano a few days ago and in the evening their big tent was crowded to its utmost capacity with a well pleased audience. (Admittance - boxes, $2.00, pit $1.00.) The miners flocked in from all quarters. The pick and shovel were laid aside, "best hats," clean shirts and light boots were donned, and every creek, gulsh and arroyo sent forth its delegation.

As Volcano is only about four miles from here, all "Fort John" were "thar;" all who were possessed of the requisite amount of funds, of course, were sure to go, and those who were so unfortunate as not to have the "needful" by them, applied to old "Mother Earth" with pick and shovel persuasions and soon obtained it. Even the Indians went, and "last," but let us presume not "least," your humble servant, Mr. Bolt, chained his trusty dog "Gumbo" to the cabin door and went also. I passed an Indian with his squaw on the trail to Volcano, and asked him if he was going to the Circus. "Yes," he replied, "me wooksum (go) Circus.” “Me mucha likum Circus." Then, shaking a couple of dollars joyfully between his two hands, he said, "Sabe? (understand) two dollar;” “me, my mo-haily” (squaw) catch'em Circus. I passed on and was soon into town. On all the trails I passed I noticed that the foot tracks were all pointed towards Volcano, not one in the opposite direction . . . The tent was of the largest size and, as I have said before, it was "jam full," and some fifty or more ladies graced and gladdened the occasion by their presence. The Indians were all in the "pit" and enjoyed the scene very highly, most especially the "tight rope performance" by "Mad Austin," who danced a "pas de seul" and kicked up generally on a tight rope elevated horizontally some seven feet from the ground, just as easily as any person would do the same on a good level floor. A chair was set up on the rope, and she stood up in it without any very apparent effort at equilibrium. The Indians opened their eyes wider than ever; it rather "took them down," and well it might, for it was hard to beat. The music was excellent, the horses were well trained, the riding was fine, the gymnastics were well performed, and one fellow did flip-flaps from the spring board at the rate of twenty revolutions a minute till the audience all cried out "stop him!" One man tossed and played with big cannon balls as though they were marbles, while others in tin-foil shirts and gilt tights performed on stilts or walked about on their hands in preference to walking on their feet, or, with their arms and legs twisted in together, galloped about the ring like so many big "tarantulas." In short they seemed to court every shape but the "human shape divine." The whole performance passed off to the full satisfaction of the audience, and nothing occurred to mar the pleasures of the occasion. The rivers are all pretty high at present, owing to the melting of the mountain snows, but the creeks and gulshes are fast drying up from the effects of the warm, dry weather we have had lately. Snow is brought down in waggons from the summits of the Sierra to supply the towns and cities with the wherewith to furnish cool drinks, &c. Ice is also shipped from Sitka. Green peas and such other green vegetables have been in the market for some time; rather earlier I think than you get them at home. There appears to be rather of a lull in politics just at present, and all parties seem to be taking breath preparatory to the coming Presidential election of next year. The "know nothings" or "American party" seem to be in the ascendant. A year ago there was but two or three lodges of them in the state, and those were in the lower cities, but now they extend throughout the whole state. In every little mining town or village they exist, but as regards their "controlling power" we all "know nothing" at present, but will probably find out at the next Presidential election.

This is a queer letter; I commenced with poetry, have finished with politics, and now "wind up" with

Yours most truly, BEN BOLT. 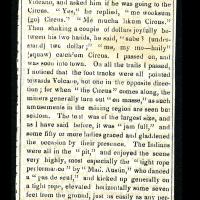