You probably perceive by the date of this letter that I am no longer a citizen of "Fort Grizzly," but since writing you last I have pulled up stakes and emigrated to this place [Fort John], where my partner and myself are snugly ensconced in a "summer residence" of cloth, sticks and boards. Fort Grizzly had become, in our estimation, rather of a poverty stricken locality, so, therefore, we sought a place more congenial to our feelings as regards mining and digging for gold. But let no one suppose from this place being called "Fort John" that it is a real warlike fortification, with cannon and U.S. troops to match, for therein they would be greatly deceived. Fort John is situated on the south fork of Dry creek, a tributary of the San Joaquin, about sixty-five miles southeast from Sacramento City, and consists of some twenty or thirty straggling log and shingle houses or shanties and a "grocery," and as for a "fort," there is no such species of a building here, unless indeed, some one of the old log cabins could be dignified as such. It is a very quiet, picturesque and pretty little place, deeply embosomed among the mountains, and the diggings here bear the name of being among the best. There is a scarcity of water here, for mining purposes, in the summer months, but public enterprise will soon overcome that difficulty, and without "petitions," "newspaper controversies" or "town meetings," simply by introducing water from the head of the Mokelumne river by means of some fifteen miles of canal.

Enclosed I send you a small branch or twig of the renowned "big tree" of the Calaveras, of which you have probably read. This celebrated tree, together with some eighty-four others comprise what is known as "the Mammoth Tree Grove" in Calaveras County.

It is situated between the San Antonio branch of the Calaveras river, and the North branch of the Stanislsus, in latitude 38 degrees north, and longitude 120 degrees, 10 minutes West, and is about 5,200 feet above the level of the sea. Here within an area of eighty acres, and high above the surrounding trees of the forest, tower the heads of these evergreen forest giants.

There are none like them upon the earth, yet known to man, in size or kind, and being truly American, they are suitably named by naturalists, “Washingtonia Gigantea,” although they are more generally known as the “Mamoth Trees.” The "Big Tree" was felled a year ago last summer and a large section of the bark was taken off, also a section of the trunk, to send home to the World's Fair. It was indeed a forest giant, measuring in circumference, at the base, 92 feet, was 300 feet high, and thought to be 3,000 years old. In order to fell it, it had to be bored off by means of long augers, as it was rather too large to admit of being chopped down with an axe. You can judge something of the size of the stump when I tell you that a snug hotel is built upon it for the accommodation of visitors, and a bowling alley is constructed on the upper side of the main trunk as it lies upon the ground. This was the largest living tree in the grove, although there are others lying prostrate there, long since dead, which are much larger. The next living tree in point of size, the “Mother of the Forest,” is still standing although it has been stripped of its bark, averaging 11 inches in thickness, which has been removed for the purpose of exhibition in the Atlantic States and Europe. The “Father of the Forest” is a large, old dead tree, lying prostrate, and nearly half buried in the earth, and measuring at the roots 110 feet in circumference. It is hollow for 200 feet of its length, through which distances a person can walk erect. When standing, the height of this tree is estimated to have been 400 feet. Another tree of the same sort, also lying prostrate, called the “Burnt Tree,” is 97 feet in circumference, and 330 feet in length. It is hollow for 60 feet, into which a person can ride on horseback for that distance. “Hercules,” “Twin Brothers,” “Three Sisters,” “Siamese Twins,” “Lone Widow,” “Beauty of the Forest,” &c., are the various and appropriate names of several other trees of immense size. The average diameter of the eighty-five trees of this grove, is about 11 feet, although there are twenty-five feet in diameter at the base.

At Fort Grizzly also, there are some very large trees, although they are hardly to be mentioned on the same sheet of paper with the “Mammoth Trees,” and while there, I measured several of them, which were 18 and 20 feet in circumference at the base, and one large sugar pine, lying prostrate, measured 22 feet in circumference, and 260 feet in length. You may think, Friend Rock, that I am spinning a pretty tall year, about tall trees, and such big stories concerning the big timber here in California, may seem rather “tough” to those whose ideas of “big trees” are connected with the elms in the town square, but, nevertheless these statistics are correct, and well authenticated.

The weather lately has been unusually cool, and rainy for this season of the year, but it is all the better for miners and farmers. With these last remarks, let’s close. 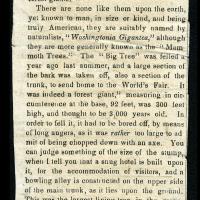