"The Father above, saw fit to give

The white man, corn and wine;

There are golden fields, where they may live,

But the forest shades are mine.

The eagle hath its place of rest,

The wild horse where to dwell;

And the spirit that gave the bird its nest

Made me a home as well.

Then back, go back from the red-man's track,

To find that the white man wrongs the one,

FRIEND ROCK: - It is but a few short years since the Digger Indians roamed the free, and undisputed masters of the beautiful western slope of the Sierra Nevada, and not a white man was there to contend with them for the possession. Through the forest shades and over the sunny hills, with bow and arrow, the Indian hunter chased the nimble deer, or on the rapid mountain torrent, with his long light spear with its head of sharp, pointed bone, he speared the luscious salmon. Venison, fish, acorns, roots, grub-worms and grasshoppers were plenty and easily procured for food, the wild beasts furnished him with clothing, and the bark of the pine was a ready material for building his little wigwam; he lived a happy life and knew no care. But now, "lo! the poor Indian," a change had indeed come o'er the spirit of his dream; the tall trees fall fast before the axes of the ever encroaching "pale faces;" towns and cities spring up rapidly in the very midst of his hunting grounds, and all the once clear and sparkling mountain streams are made thick and muddy by the incessant wash of the industrious miner. The long "Kentucky rifle" has thrown the bow and arrow entirely in the shade, and the poor Indian is now obliged to come down to manual labor, although it certainly goes very much against the grain.

Ever since the first settlement of America, ever since the landing of the Pilgrims, the Indians have been driven westward. Like "poor Joe" in Dickens' "Bleak House," they have ever been ordered to "move on.” Despoiled of their lands, they have “moved on,” step by step, on the weary trail, “moving on” towards the rocky mountains and the plains, and wide prairies of the far west. Now, from Oregon, California, and the other settles states of the Pacific coast, they are crowded back into the interior; slowly but surely, the race of the redman is fading away, “moving on” to be among the things that were; their destiny must be fulfilled, and a few centuries hence, the “Great Spirit,” will have called all his red children home to “the happy hunting grounds” where the pale-faced intruder never comes, and the order to “move on,” is never heard.

These Indians here in the mining region are generally of a quiet, inoffensive disposition, although on the frontier they are rather inclined to be unruly and troublesome as yet. They have a great aversion to labor; indeed a Digger Indian never works when he can possibly get along without it; he had always rather beg than work for his food; but when he happens to stand in need of a little money, he generally repairs with his squaw to the most convenient "diggins" and sets her to work digging and carrying dirt, while he sits in some comfortable place by the water and washes out the dirt in a pan as she brings it to him. As is generally the case among all Indian tribes, the women have to do all the hard work. In the fall of the year is the Digger's harvest; the large, sweet acorns are then ripe and, as they are a "staple commodity," a large stock of them is collected and laid in for the winter. They are prepared for eating by being first beaten in stone mortars into a sort of meal, which is boiled in baskets of wicker work rendered water tight by a gummy preparation; the squaw stands by, with a couple of sticks by way of "tongs," and pitches heated stones into the mess until it is cooked into a sort of thick mush called "Noopa' which is said to be "good eating," but this I do not know from experience. There are also several kinds of farinaceous and gummy seeds which the squaws gather, when the plants or stalks are dry, by beating or brushing them with a basket-like fan into a larger basket held low for the purpose. Various kinds of insects, such as grasshoppers, crickets, wasps, grubworms &c, are also "laid in" for the winter's consumption. Grasshoppers are held by the Diggers in about the same high estimation with which oysters are regarded by civilized epicures and lovers of good eating.

In the fall, when the grass is dry and grasshoppers plenty, all hands turn out; men, women, boys and girls, just as a lot of us would go “blackberrying;” a party of them surround half an acre or so with large brushes or brooms of chapparal, driving the grasshoppers in towards the centre. The grass is then fired on all sides and, it being very dry, it burns like a train of gunpowder and the poor grasshoppers catch a scorching. The fire is over so quick that it just singes and browns them "to a turn;" they are then collected in baskets and sacks, bushels of them being sometimes gathered in a day. These are eaten a la parched corn, or crushed up into a pasty mass and eaten with the fingers, of course. These Indians congregate mostly about the towns and are generally allowed to work when they will, pretty much where they please, as all the work they do impoverishes the diggings but very little. There are also government reserves set apart for them in different parts of the state. Their language has rather of a gutteral but pleasing and musical sound, and those who live about the towns and camps learn English very readily. The women are not remarkable for their personal beauty or cleanliness, and the "Bright Alfarata" of Mrs. Sullivan's beautiful ballad would hardly find a representative among the Digger maidens. Their "Rancherias," or towns, consist of a cluster of wigwams made by driving a lot of long sticks into the ground in a circle, joined together at the top, and the whole covered with strips of bark except an aperture at the top, by way of chimney, and the fire is made in the middle of the floor. Numerous noisy, stiff-eared "cayote" dogs and plenty of fleas, filth and vermin serve to make up the other requirements of a '''Rancheria.'' When a Digger lady loses her husband, her head is covered with pitch and she wears this emblem of mourning for several months. The body of her lord is placed on a pile of logs some two or three feet high, and is burned; the friends crowding around as close as the heat will allow and remaining till the body is consumed.

Since my last letter we have had plenty of rain. The spring rains come in finely; all were praying for rain and now we have it in abundance, enough to supply even the very dryest parts of the mines. In some places the rain poured down with a perfect prodigality, causing freshets which destroyed dams, sluices and did other injury. The "hard times" are getting better, the miners are doing well and all kinds of business has received a fresh impetus. But this line fills up my sheet, therefore, for the present, adieu. BEN BOLT. 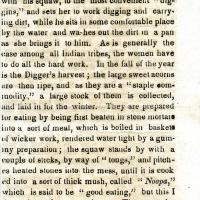