"Oh, why does the white man follow my path,

Does the flush on my dark cheek, waken his wrath,

Does he covet the bow at my back?

He has rivers, and sees where the billows and breeze,

Bear riches for him alone;

And the sons of the wood, never plunge in the flood

Which the white man calls his own.

Then why should he come to the streams where none

But the red skin dare to swim,

Why, why should he wrong the hunter, one

The winter thus far has been unusually dry, and the times are much harder throughout the mines than they have been since '49. The winter of '50 was a "dry Winter," but gold is not so easily found now as it was then, and the improved methods of washing out the gold require much more water than formerly, when the cradle or pan was as profitable as the sluice is now, therefore the lack of water is much more severely felt and the miners now see "hard times" indeed. A miner's credit is good at any of the stores when he is making money, but now the traders are obliged to close their books and refuse any more credit, many of them having sold goods so long on credit that they are unable longer to keep up their stock, owing to the lack of cash.

One trader at Volcano a few days ago showed me in his books where he had credited the miners thereabouts for provisions &c to the amount of some four thousand dollars. Said he, "It's all good, and I know the boys will pay me as soon as they can get water to work with; but my bills at San Francisco are pressing me now, and at this rate I shall soon be unable to meet them and consequently must close my business." Many other storekeepers are in the same "fix," and the times are about as hard on them as on the miners. The storm of the first of January did but little good, supplying a few locations with a limited supply of water, and since then there has been no rains of much account. We have always had rains in the spring, but if these too should fail, the farming community also must suffer. But my letter waxeth long, so I'll draw it to a close.

In my former letters to you, I have written under the name of "California," which I adopted as my "nomme de plume," but a friend writing to me says I have no business with any such name - says I "don't belong to California" or "California" to me - that "California is too much hackneyed already," and that I must sign my "real" name; so to please him I suppose I must. Therefore, friend Rock, humbly begging your pardon for having "sailed under false colors," I remain with much esteem, Yours truly, BENBOLT. 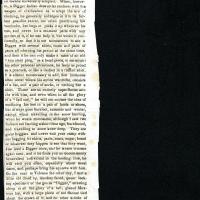