The following letter from a highly esteemed friend in California, we believe to contain a reliable statement of “matters and things in general,” in that State, together with other matters of interest to Plymouth people, at least. A residence of some five years in the “Land of Gold,” should enable him to form a pretty correct opinion of the “elephant” which he assures us, in a private note, he has positively seen:

DEAR "ROCK:" - In compliance with your request, I embrace the present opportunity of addressing you a short communication on the state of matters and things in general, and will try to give you an inkling of the doings at this end of sundown.

Well, in the first place, we will premise that you recollect, in “days lang syne,”one fine Sabbath morning, while the merry church bells were ringing, the good old bark “Yeoman,” weighed anchor, spread her sails to the breeze, and took her departure from that part of old Plymouth harbor known as the “Cowyard,” bound for a remote region in the far west, called California. On board was a gallant company of the sons of “Old Plymouth,” among whom was no less a personage that your humble servant. As we shaped our course out past the “Gurnet,” we thundered forth our last adieux from the mouths of two old rusty cannon, and as the good old town faded dim in the distance, many a swelling tear was dashed away, as we thought of those we left behind. Long months passed, away, and we arrived safely at the land of promise, and our hearts beats high with hope, as we thought that we would be returning to the “loved ones at home,” with our pockets well lined with that for which we came – the yellow, all-powerful gold. A few months passed quickly away, and our little band separated; each started his own way in the pursuit of fortune, and the good old bark which bore us safely here passed into the hands of strangers. Years have passed away since then, and now where are those who were once of the “Pilgrim Mining Company!” Still scattered; -some are at “home,” some at “Vallecito,” many are at “Shaw’s Flat,” (which place by the way appears to have a peculiar attraction for all of the California Plymotheans,) one is a “Mokelumne Hill,” and I am here. I often see my old companion and shipmate at "Mokelumne Hill," and exchange news with him concerning our friends at home, and have a talk about our beloved "Old Plymouth," and thanks to your kindness we are occasionally blessed with the "Plymouth Rock." We greedily devour the home news, which is generally from four to six weeks old, when we get it, and as for the advertisements, I always read them through from beginning to end; for I can always tell more about the doings in town by them than by half a dozen letters. I tell you, Friend Rock, you folks at home don't half know how to prize an old newspaper.

In '49 Young California put on a pair of seven-league boots, and since then she has been striding ahead at a rate unparalleled in the history of the world. Young children - not the "oldest inhabitants" - remember when the now mighty city of San Francisco was the little Spanish village of "Yerba Buena;" and where now stand palatial buildings of marble and granite, once stood a few little dirty adobe houses. The green surf no longer rolls upon the white sandy beach of the cove of "Yerba Buena;" and where six years ago large ships swung at anchor, now stand splendid stores in the heart of the city, and beyond are buildings and long wharves extending far out into the bay. Five years ago, whale boats, launches , and 178 The Journals of Alfred Doten: Book No.9 Spanish Gulch: 1854 179 little outlandish droghers, after a long, perilous, and toilsome passage, of from two to ten days or more, up the rivers, landed their loads of the first victims of the gold fever at the little tent towns of Sacramento and Stockton; - where now splendid floating palaces, driven by steam, "through by daylight," land their passengers at the noble cities of Sacramento and Stockton, Then, on the roads to the mines, all travelled on foot - each one with his bundle, blankets &c., slung over his shoulder, sore footed and weary, trudged along the slightly beaten track; now, on fine, well worn roads, splendid "Concord built" coaches, with their passengers comfortably seated on velvet cushions, are whirled along as fast as the finest and best of horse-flesh can carry them.

All sorts of improvements have been introduced in mining; the days of the "tin pan and sheath knife," are past and gone; the "cradle" is thrown aside, and the "long tom" is fast yielding to the "sluice." This is the grand leveller; by it banks and whole hillsides are fast disappearing down the gulches, creeks and rivers, and the old cradle "tailings" of '49 are considered among the richest of the auriferous soil. The rivers are dammed and turned, and by hundreds of long miles of canals, flumes and ditches, the water is brought into elevated flats, arroyas, and places where water never was seen except during the heaviest rains. A mountain is no protection at all to a gold deposit. If a big hill is suspected of containing any sort of a justifiable quantity of the "root of all evil," a few shrewd miners put their heads together, and directly immense excavations are made, enormous tunnels are run in and deep shafts are sunk. In all "hill diggings" many make their "piles," but where one makes a fortune fifty get "flat broke," owing to the expense incurred. Many are of the opinion that the mines are on the decline, and will soon be "worked out," and exhausted; but it is a "quien sabe case." I think it a moral impossibility to exhaust them, either in your day or mine. New placers are daily discovered, and the old diggings, by means of the allpowerful sluice. . . are being washed over again with great profit. The "cream," certainly, has been skimmed off, and a "green one," just into the mines, stands rather of a poor chance even of making a living, unless he hires out.

I presume you have seen by the late newspapers that the new filibuster “Republic of Sonora” like Joel Shag’s camphene engine, has “busted and blowed up,” and the last remnants of this filibustering tribe, together with Col. Walker, their quondam “president,” have come crawling back, with their fails between their legs, and have surrendered themselves into the hands of Uncle Sam – preferring to be punished by him for their misdeeds to being longer exposed to the awakened vengeance of the outraged Mexicans. They were indeed fortunate to escape with their lives, which would have been but a just forfeit for their many crimes and outrages on the poor inhabitants of Lower California.

We have been visited with an unusual quantity of thunder storms lately; the “poor Indian” shaked his head and lays it all to the presence of the pale-faced “Americano,” who has introduced this extra quantity of thunder among the rest of his improvements.

I won’t bore you any longer just now, but will try and communicate with you again soon; so for the present adios. CALIFORNIA. 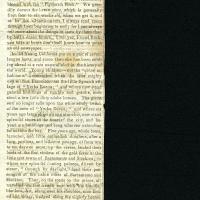