VIRGINIA DAILY UNION: Summer having passed on in its usual course to join with the numerous bright summers of the past, and the chilly blasts and snows of next winter being only a few weeks in perspective, we are naturally inclined at this time to take a cursory view of our prospects, and endeavor to judge, from the experience of the past, what the future may be. A year ago all was life and animation here. Prospecting for rich silver mines in the numerous fine ledges was everywhere being vigorously carried on, and every day some new discovery or development in the way of "splendid looking rock" or most encouraging "indications" was exciting the public mind. The taking up of claims and incorporating companies to work them under fine sounding and auspicious titles was all the rage and no one felt satisfied until he had obtained by trading or actual purchase, a few feet in some one or the other of these claims which he had become convinced was an "almighty good thing," and one of the claims which was to make him independently rich, and transform all his splendid future plans and fine castles in the air into living, tangible realities. The dream was glorious while it lasted; town property was held firmly at big and increasing prices, and the exhilarating sound of the busy hammer and saw was heard on all sides, hurrying up buildings to accommodate prospecting visitors, and the daily new accessions to our permanent population.

We are quiet enough now. Nobody wants any more "feet;" town property is low in the market; carpenters' tools are pretty rusty, and our population is not so heavy as it was. The prospecting visitors, and temporary portion of the community have moved on to other portions of the country, where they will tarry awhile with newly excited hopes and prospects, and again "move on." Prospecting is at a discount, as far as new discoveries are concerned, and the numerous pieces of mining stock, so prettily gotten up and upon whose face we were so anxious to see our name representing us as the fortunate proprietor of so many "feet" or "shares" in such and such a rich claim, are all carefully filed away for future reference and carried round in the pocket book no longer. None but some among the best or most prominent of our claims are being worked, but these are being operated with an energy and stability of purpose that must eventually prove successful in developing good paying mines; for all the assays and milling tests we have had thus far, tell us that our ledges are among the best in the country, and only require to be gone down on to a sufficient depth in order to develop rich paying ore. This we are bound to do, but the process is necessarily slow, greenbacks or anything else in the way of circulating medium being very, very limited in circulation here as elsewhere.

But our hopes are high as ever, and faith in our mines not abated at all. Our society is of the very best; sociable, happy and content, as circumstances will admit; so we shrug our shoulders at the past, and look forward with confidence to the future, feeling that we can weather the hard times and come out all bright when the spring of prosperity shall open over this embarrassed Territory once more.

We are going in strong for the new Constitution, and I predict that throughout the Territory the vote for it, and the adoption of a State government, will be carried by a larger majority than that by which it was refused last January. The political cauldron is seething and boiling fiercer and fiercer as election day approaches; the numerous candidates are out prospecting around among the voters, and all the prominent corners and door posts are disguised and beplastered with the announcing placards of the legion of aspiring candidates. Oh ! the long faces there will be after that eventful election day is over, and how the Salt River boat will be crowded. There will have to be extra boats put on the route this time, sure, for never before were there so many candidates in the field, in this county at least. Our County Union Central Committee—a set of droll cusses—put their mirthful heads together and with a facetiousness worthy of a better cause, concluded to put a grand practical joke upon their dear constituents—the people. So they would not allow the usual privilege of primary meetings, but told everybody that wanted office to pitch in and get it. Now, strange to say, there were several who, although they didn't want office at all, yet were willing to sacrifice themselves upon the altar of public interest, merely for the benefit of the dear people. So they all "entered" for a grand scrub sweepstakes race, and the consequence was, that in the next issue of the Sentinel came out a list of candidates as long as the moral law with the ten commandments tacked to the end of it. It was funny to see how many there were that thought themselves well qualified to fill the various offices, and to reflect upon the number that were fully as eligible and deserving, but whose natural modesty held them back from announcing their names in the paper or on big placards, as candidates for the Assembly, for Sheriff, for Recorder, and down to the smallest kind of a public office. And, now in order to highten the joke, the committee gleefully hook hands together, and concluded to call a convention to nominate a ticket for the people to vote for. So, feeling that the people were incapable of selecting their own delegates to represent them, they just appointed a lot, who of course held a very harmonious convention and did things up according to programme. But will this satisfy the people? Will Copperheads take advantage of such a jolly state of affairs or not? We can tell best about it after election. In a few weeks again, the Central Committee will have to act in relation to the election of officers to govern our new State, and will of course do as they did before and tell all aspirants to sail in. So, therefore, in order to be in season, and forestall several I know of in this town as well as elsewhere, I hereby announce myself as Independent Union Candidate for Governor. 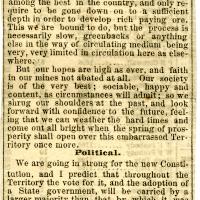