VIRGINA DAILY UNION:--You are not to suppose that because times are a little hard with us, and greenbacks scarce, that the people of Como have given up to the general spirit of depression, and settled themselves into a fit of the blues. That's not the case by any means, but, on the contrary, we endeavor to "keep a stiff upper lip," and smiling countenance, gathering numerous crumbs of comfort from the fact that we are no worse off than our neighbors.

C. A. Witherell, Esq., who has just returned from a trip to the Silver Mountain country, whither he went seeking for a chance to better his condition, reports things there fully as dull as here; very little doing anywhere; no money lying about loose; in fact, he came to the conclusion that he could get along as well in Como as he could anywhere that he went, and as far as future prospects are concerned, this district had decidedly the advantage. The only places where there appeared to be much going on in the way of improvement, was at a little place called Silver King, where there had been a saw mill recently erected, and twenty-eight houses just built, but only four of which were occupied as yet. The intention was to build a few more houses and quit.

We have very little to note in the way of improvement here in Como, although of course something is done in that line every day, people generally seeming to be inclined to arrange things comfortably for the present, and wait patiently for "the good time coming" to arrive. Mr. H. B. Hammer has just finished his fine drug store on Main street, and furnished it in the most complete manner. A better selected stock of goods cannot be found in the Territory. He has everything that is ever likely to be required here in his line, from balsam copaiva to cherry pectoral, and from a quill toothpick to a nursing bottle. The telegraph office also has just been removed into the drug store. In looking around at the vast array of patent medicines and potent drugs displayed on Mr. Hammer's shelves, one is naturally led to the firm conviction that it is the easiest thing in the world to regulate the health of the entire community to a perfect nicety, so that any one can be sick or well just as it suits them, with such a drug store in their midst. He has a specific cure for every known disease or ailment human flesh is heir to; also, all varieties of poisons, enabling one to choose their own style of death—together with specific antidotes for each and every one of them, in case one should change their mind after imbibing a poisonous draught. There will be no more deaths in Como, except by suicide or accident, unless, indeed, some fool growls himself to death over the idea of "hard times," or works himself into such a painful condition of sore-headedness over imaginary slights that his crabbedly jealous disposition won't allow of his living in peace with his fellow man, but that all jokes directed towards his own immaculate self are intended as an earnest insult, which, sooner than endure for a moment, he would rather growl himself into the last stage of pusillanimous imbecility. To all such I would recommend marriage and the daily use of a gallon of beer from the Como brewery.

We have been anxiously and closely watching the action of the Convention assembled at Carson to frame a Constitution for our proposed new State of Nevada, and incline to the opinion that they are about perfecting a Constitution that will be accepted by the masses of the people in this Territory. The article on the Judiciary, as also that on Taxation, commend themselves to the approbation of all who have the true interests of the country at heart. Copperheads are not expected to fancy the true loyal sentiments of that Constitution; not that I wish to class any one as a Copperhead who don't happen to view things in the same light that I do—but all true Union men cannot fail to respond to those sentiments. The indiscriminate taxation of the mines was the rock on which the other Constitution split. That rock has been carefully avoided this time, and the Legislature will be left to decide as to whether the net or the gross proceeds of the mine shall be taxed. This is as it should be. Our last Legislature would insist on taxing the mines, but we'll try and put competent men into the next Legislature.

Prominent among the claims being actively worked here now is the Monte Cristo—lying within the town limits and one of the claims in the district which may be classed as A No. 1. It shows a wide, well-defined ledge, in portions of the surface of which gold is distinctly visible to the naked eye. It is owned mostly by Frenchmen, and the work on it is being carried forward with great energy, both night and day, running two shifts. They are sinking a new double shaft, five by ten feet, which will strike the ledge at the depth of two hundred feet. It is now sixty-five feet deep, and is to be thoroughly planked from top to bottom. The shaft of the Como company is now forty-one and a half feet deep, and a drift is run from the bottom thereof thirty feet due east. It is a fine piece of workmanship, and the indications are splendid. The shaft of the National is now down to the depth of twenty-nine and a half feet, blasting through solid ledge all the way. They have now struck a strong vein of water, which promises to be a valuable acquisition. Mr. Cross, the Superintendent, informs me that, with the present arrangements, they cannot go much deeper, but it is his intention to erect hoisting works soon. The rock at the bottom is of an excellent quality, and a piece of it shown to me yesterday, by the efficient foreman, Mr. Nason, was filled with splendid sulphurets.

Since the Indian difficulty, which we had in May last, the Pi-Utes have kept away from about here entirely, but within the last few days several have arrived from the Sink of the Carson, and are now encamped on the hill opposite town, with their squaws, papooses, &c. The Indian who was shot at the time of the difficulty of which I speak, was badly wounded, the thigh bone being shattered. He was brought into town, where he received every care and attention that humanity could dictate, and several of his brother Indians attended him, but he was shortly removed by them to Walker river, where he died some four days ago. A. D. 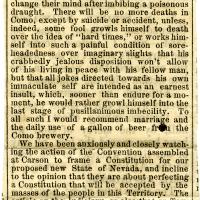