Time rolls on apace, and so does Como. But as we thus roll on in the course of human events the thought sometimes suggests itself to me that we do not roll ahead fast enough. Perhaps I am too impatient and unwilling to await the slow but sure developments that Time brings about, and therefore am inclined to think that our mines here are not being developed fast enough. And in many instances I know I am correct, for although, to be sure, we have the Whitman and the Rappahannock, both of which are proven to be rich paying mines, yet we have many other fine large ledges, the surface rock from which is decidedly far better than the general surface rock of Gold Hill or Virginia, and no doubt when they shall have been sunk down upon as deep as in the mines of those older districts, will be found to be fully as rich, and even richer; yet "that's what's the matter;" we have innumerable shafts and tunnels, but very few of them are being driven forward with the energy that they should. We have just to "go down" on our ledges and try and develop them a little faster before we can ever expect to catch up with the older districts. Slowly but surely one ledge after the other is being found to be rich; that's so. But I only object to the slowness of the process. As I said before, perhaps I am a little too impatient. Don't know but I am.

As far as beauty of location, good surroundings, plenty of pure water, abundance of wood, fine, sociable, well conditioned society and all sorts of general advantages are concerned, Como is a town which cannot be beaten anywhere in this thriving Territory. We are never subject to the "blues," but endeavor to jog along as philosophically jolly as possible. On any reasonable pretext whatever the Como brass band is ever ready to turn out "in style," and enliven the free mountain air with the glorious strains of "Hail Columbia" and "Yankee Doodle," or the "Sage-Brush Serenaders" will nocturnally insist on disturbing the midnight slumbers of the fair sex with their romantic and seductive warblings. We have a prodigious amount of musical talent here, for a small city, and in great variety, too; from an irrepressible fifer to a magical performer on a big bass drum and pair of cymbals, which he does all at one lick, very seldom losing his identity, notwithstanding the great amount of noise he produces.

We have a fine, flourishing day school of twenty-five scholars, who, under competent tuition, are ascending the ladder of learning at a brisk pace. One Sunday school and Bible class, too, I can vouch for, from personal inspection, as being in a highly thrifty state, with plenty of good books in the library, and good teachers to show the members, both little and big, how to be religiously happy.

Cross's National Hotel still remains in the same comfortable condition as of yore, furnishing "entertainment for both man and beast." A. D. boards there, and is getting fat, like the rest of those who partake of the good things there to be found. That brewery, the Como Brewery, still continues to produce that immortal nectar in the way of lager, of which the iniquitous "Mark Twain" was so evidently enamored during his visit here, a short time ago. Poor fellow ! he attempted many times to go out and inspect the mines, that he might report upon them, but humbly acknowledges that he could never "get past the brewery," where he sat and drank "gallons and gallons." He did succeed, however, in visiting the Whitman mine, which lies in the opposite direction from the brewery.

Whisky drinking is getting more and more unpopular, especially since the 1st of this month, when the price was raised to two bits a drink; but "spiritual manifestations" are still to be seen, in the shape of a small "knock down and drag out." Lieutenant Vanderhoof is here, enlisting all the copperheads he can find. He says they are the very men he wants, and that they make fine soldiers; which is an argument in favor of their "soundness on the goose." Singular circumstance, however.

The Doctor and his Box.

We have several notional geniuses here, not the least of whom is a certain N. D. who can never be persuaded to sleep in anything but a box which he got up himself. In the daytime it is made to fold one part over the other in a mysterious manner, so that it forms a sort of bench to sit on; but at night it lies spread open, and is wide enough for two, in case of matrimonial investment on the part of the Doctor. That coffin-like bed also serves to remind the Doctor of his latter end and last resting place. There he lies and cogitates, when not asleep, like as Diogenes used to sit in his tub and philosophize. And there, night after night, he dies in the arms of Morpheus, to be resurrected next morning by the sound of the mill whistle, which, however unlike Gabriel's horn, calls both saints, sinners and doctors, not to repentance, but to work or to breakfast.

A Sheep in Wolf's Clothing.

Cross, too, in his bar-room of the National, cannot sleep in anything but his desk, where he files himself away among the rest of his papers, night after night. First a pulu mattress document, then a sheet, then Cross, then another sheet, then a big cover, or envelope of wolf skin, and there he lies, both eyes shut and mouth gently opened; the picture of innocence; a veritable sheep in wolf's clothing. Around the middle of this precious package, A. D. ties an imaginary string of red tape, and labels it thus:

The Como Sentinel will publish its first issue the last of this week, and will hereafter keep the public posted in regard to Palmyra District, probably more fully than A. D. has done; therefore, with this letter our correspondence will probably cease.

During the past eight months it has been a pleasure to me to correspond regularly with the UNION from here, and it is not without a feeling of sorrow that I now bid you adieu. But you will still hear from me, through the columns of the Como Sentinel, whose affections I shall gently woo, on the principle that charity begins at home. 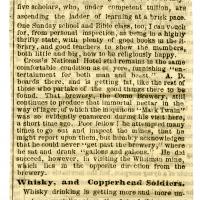