The First Clean-up from Whitman Rock.

VIRGINIA DAILY UNION: The last clean-up of our mill was made apparent yesterday, in the shape of a comfortable sack full on crude bullion, weighing, in all, 1,068 ounces. Mr. Solomon being sick, it was not melted and assayed here, but sent per Langton's express to the headquarters of the Whitman Company, at San Francisco, for further doings thereon. This splendid yield of bullion proves beyond a doubt the immense richness of the Whitman mine, and places it side by side at once with your far-famed Comstock. It must also be borne in mind that these are the returns from crushing nothing but the actual croppings of the Whitman, not being taken from any shaft or tunnel, and if the surface rock pays so well, how will it pay at the depth of a few hundred feet? In fact, if no better ore is ever discovered than these croppings show, it is a good thing enough, for there is plenty of it standing at the surface of the ground—enough to keep a hundred stamp mill crushing steadily for a hundred years.

A Visit to the Mines.

A few days ago I paid this Whitman ledge a visit, for the purpose of satisfying myself in regard to the present and future prospects of the thing. I was hauled out there on a big quartz wagon, propelled by six long-eared mules, commanded by a gentleman whom I think a heap of. At the diggings—for I hardly know whether it would be proper to call it a "mine" or not, as yet—I found some seventeen honest miners, under the direction of J. Turner, Esq., the Superintendent, doing a highly promiscuous amount of work, in the way of tumbling and smashing big masses of rock from the croppings, taking down small forty foot banks of earth which happened in the way, wheeling wheel barrows, drilling holes, and a small train of cars carried unlimited quantities of waste material over the dump. All this, however, is only preliminary, and these honest miners are merely a skirmishing party which Mr. Turner has thrown out, preparatory to a grand attack upon the mine itself. He showed me the richest streak which he has discovered as yet, and it is his intention to follow the aforesaid streak, [halfway] down into the bowels of the world, in operations of illimitable extent. Being a practical miner myself, I heartily indorse the soundness of the idea. The Whitman ledge is the Comstock of this vicinity, and is creating considerable excitement among those who appreciate good feet. But it must be recollected that although the Whitman is the only lead satisfactorily tested thus far, we have numerous others aspiring to favorable consideration. The Rappahannock, for instance, shows ore now which is undoubtedly very rich, and just as good as the best average ore you can scare up in your favored locality. It is taken out at the water level and there is lots of it; and when the hoisting works are erected on the mine, and the thing properly got at, rich results are sure. The Rappahannock is involved in litigation at present, which impedes operations somewhat, but all will be right in the end. The Union Company, the first on the extension south same ledge, is sinking a big double shaft which will strike it about 200 feet deep. Stock in the Union is up in the market, as it should be in the heart of every loyal man. In response to the kind invitation of the gentlemanly superintendent of the Buckeye Tunnel, I went in and took a look at that underground institution, a day or two ago. The tunnel is 686 feet in length; it has already tapped two good ledges; when they strike their Mammoth ledge, which they will tap at the depth of nearly or quite 300 feet, it will turn out one of the richest things of the district. The Montezuma also is sinking a big double shaft which will develop unmistakably rich ore, for the croppings are of the richest in the district, if assays can be at all relied upon, and future developments will show the Montezuma to be only second if not equal or superior to the Whitman. It is a very valuable mine. Be it understood that in this district we do not deal in "wild cat" for the simple reason that we have plenty of good, substantial ledges without.

A Board of Brokers was organized here a few evenings ago, and will soon be in operation. It is called the "Como Miners' Stock Board," and tremendous operations in the "feet" hue may be looked for in due course of time, if not sooner.

Como still marches onward in improvement, like a jackass wades into a box of barley, and "every day brings something new" in the shape of progress. Alexander Horn, Esq., so long and favorably known to the town of Palmyra as the storekeeper thereof, has become imbued with the idea that Como is to be the Virginia of this district, and he has accordingly left Palmyra recklessly to its fate, and carted all his "plunder" up to Como, where he has opened a fine stock of goods in the shape of towels, cheese, hats, whisky, dried apples, jack-knives and tobacco. He is a lovely young man, and the ladies all admire him. Alex. may be mistaken in his idea of evacuating the town of Palmyra, however, for that town also is bound to go ahead in due course of time, same as Gold Hill does. It is in a good situation, and the heavy springs at that point are already taken up and claimed for milling purposes. The Rappahannock and other rich mines thereabouts must erect mills there, and although the population is small, at present, it must inevitably increase, for they drink the Como lager there exclusively. The place is bound to thrive. A. D.

P. S. Mr. Turner has just come in from the Whitman, and brought with him pieces of the ore which would do stockholders, or "any other man's" eyes good to look at. Native gold and wire silver is plainly visible to the naked eye, amid the richest kind of black sulphurets. He sends it to San Francisco to-day, per express, that the stockholders therein may wax jolly over their prospects. There is plenty more where that came from. A. D. 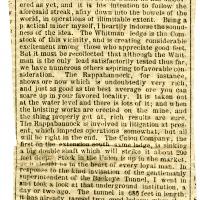