VIRGINIA DAILY UNION:--Yesterday, us Comoites made merry, and waxed exceedingly glad. Yea, verily, we were particularly jolly. And why shouldn't we feel jubilant? Mr. Abraham, editor of the coming paper, the Como Sentinel, arrived the evening before, and brought us the good news that the press, printing materials, and all the little details necessary for the establishment, was then in Dayton, and would be here on the morrow. At 8 o'clock next morning a telegram announced that the teams had left for Como, with their important freight. Passers on the road, arriving at various times, reported to us the progress of the teams, and we accordingly made preparations to receive them in good style. After dinner the Como Brass Band turned out in full force, and with the glorious old star spangled banner floating from their splendid band wagon, paraded the streets, all the fine animals of the team being gaily decked out with elegant nettings and lovely plumes. The rich martial streams of music swelled upon the balmy air, as this hilarious turnout moved towards Palmyra, on its way down the road, to meet the coming press. Just in the lower suburbs of the promiscuously thriving town of Palmyra, we met the teams coming with the press and materials on board. The teamsters gazed with projecting eyes at their escort, it being an arrangement that they had hardly expected to meet in this sage brush Territory, and came to a halt, but immediately became assured that our intentions were peaceful and salubrious on a bottle of cocktails being produced, which we had thoughtfully brought along from Martin's saloon, foreseeing their exhausted condition. To their kind inquiries as to our heath, we answered "jolly," and when they asked us if we could "stand the press," we bade them "press on." Arnbold, too, of Palmyra, seemed willing to "stand the press," as well as the drinks, for he would have us all stop at his house and lemonade all round. The mules, also, of the press team were all treated to a drink of water from the big spring, and the procession moved on up through Palmyra, towards Como, escorted by the music, playing many a lively air, the strains of which reached the ears of the miners toiling in the shafts and tunnels on either side, who immediately dropped their picks and, with loud cheers at the passing train, evacuated the premises and struck out for Como to see the fun out. As the plumes of the leaders of the band team appeared over the divide, entering Como, the two big anvil batteries, which were in readiness at either end of the town, commenced banging away at a tremendous rate. Billy Bartle and his able assistant, Bill Davis, worked the upper battery, and Capt. Donald Ross commanded the lower battery. Madly rushed the excited artillerymen, and bang ! bang ! thundered the bounding anvils, each battery striving to outdo the other, and forcibly reminding us of the famous battle between the Monitor and Merrimac. It was a regular "anvil chorus" and no mistake, and much powder was destroyed thereby. The train moved down through Main street and up Fifth Avenue to the printing office, with the band playing the soul-stirring airs of "Hail Columbia" and "Yankee Doodle," amid the hearty cheers of the citizens; and so now that long expected press is safely here, and in due course of time you will see the product of it in the shape of the Como Sentinel, a weekly paper, which will be devoted to the mining and public interests generally, and although not a political paper it will endorse the present Administration. Our town is only some eight months old, but still the rapid increase of population, business, etc., has so soon required the establishment of a newspaper here.

Our mill is still pounding away on Whitman rock, and from present indications we shall soon have one or two others in course of erection, for the value and permanency of the mines of this district is placed beyond a doubt. In fact, if Palmyra District was only situated about two hundred miles out in the midst of the great desert basin, instead of being so near home, the rush hither would be wonderful to contemplate, and it would speedily assume the reputation of being the very richest scrap of country in the known world. A. D. 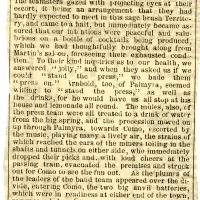