Our Mills and the Mines.

VIRGINIA DAILY UNION:--Our new mill, after a nice little rest of a few days, is about to take a fresh start, and this next week will commence crushing rock from the Whitman Ledge. Fine quartz is now being hauled from there, and from it great results are anticipated, for the Whitman is rich beyond a doubt, large quantities of the rock having been thoroughly tested in other mills, enough to convince any one that it must pay the biggest kind. The management of the mill has passed into entirely new hands, J. B. Winters, Esq., being now the Superintendent, and Mr. L. Soloman will have charge of the amalgamating department. Mr. Solomon is a gentleman whose great practical experience in the amalgamating and assaying line highly qualifies him for this important position, and a more judicious choice could hardly have been made. His assay office, here in town, will still continue in full operation, in the immediate charge of his son, a highly intelligent young man, fully competent to the task, who will continue assaying on the same reasonable terms as before. Outsiders seemed to be under the delusion that the stoppage of this mill would operate as a sort of damper upon our prospects, but that was a great mistake for things were never so lively here as at present; lost of strangers are coming in every day, and all tell us that the fame of Palmyra District is spread far and wide, and that the next "big rush" will be made to this locality. And most assuredly this must be the case, just as surely as water will run down hill, for we have the mines here, and good ones too, as recent developments have amply proved. As we sink on our big, well defined ledges, we find the ore richer, until—like the Rappahannock for instance—we find ore that would make even the Gould & Curry grow black with envy. A few days ago the Monte Cristo showed ore very rich, being of the best kind of sulphurets; considerable of an excitement was created thereat, and feet in the Monte Cristo are now in demand at high figures. The shaft of the Shiloh is now down to a depth of 120 feet, and, under the energetic superintendence of G. A. Brier, Esq., the work is being vigorously prosecuted. The ledge is now seven feet between the walls, and composed principally of a peculiar soft, porous, gray quartz, which, on being subjected to the roasting process, produces fine globules of silver in abundance. It is rather unpromising looking rock, but it is "like a singed cat, better than it looks." The Shiloh has always assayed well—as high as four and six hundred dollars to the ton—but speaking of assays reminds me of the big assay which Mr. Solomon got from an ordinary looking piece of the Whitman rock, day before yesterday, of $3,131 53 to the ton. If it will only crush one tenth part of that, under the stamps, it will not be "bad to take." The Amazon Tunnel, under the efficient management of Mr. Weston, is driving ahead, and is sure to be one of the future "big things" of the district. It will tap many of our best ledges a thousand feet deep, and cannot fail to be a good paying enterprise; all who own feet in it have their fortune secured. A few weeks ago a company was organized here, and went out to prospect the famous Desert District. They saw the elephant, played with his tusks, and came home a day or two ago, wiser if not richer men. They don't want any feet in Desert District. They made a location, but don't intend going back to work it. They don't wish to discourage any man who feels disposed to be an enterprising cuss, but all who go there, or to Reese, will be apt to come to the conclusion that charity begins at home and that they haven't bettered themselves by going to Desert.

A while ago I made mention of the beneficial effects which the lager of the Como Brewery was having in promoting an increase in our population, and I now have to tell you that within the last few days the entire brewery is discovered to be posted directly on top of one of the finest kind of ledges, of as rich looking quartz as one might wish to see. The ledge is "blind," not appearing on the surface at all, but is now found running directly through the cellar where the beer is kept. It may not have been the remarkable qualities of the beer which produced this ledge, but there certainly was no such ledge known of before the brewery was placed there. It is called the Lager Beer ledge, and the Whitman Company are sinking a fine shaft, in order to prospect the ledge fully.

The Como Fusiliers, a fine military company organized here in town, drill regularly under the command of Capt. C. A. Witherell, lately of the army of Gen Rosecrans. Fort Churchill will never again be called upon to protect us from the rascally Pi-Utes. We are fully able to protect ourselves. We ask no odds of anybody. We read that the Alabama, with the Southern Confederacy on board, is coming with a big fleet to desolate this side of the Continent. Let them come on! They'll have a jolly time of it. They must wade through blood. They may blow up Fort Alcatraz; they may bombard and destroy San Francisco; they may take Sacramento; they may take Carson, and destroy the hall where the Constitutional Convention met—but does it follow that Como can be taken? Well, we reckon not; not till the last armed Fusilier expires!

I told you in my last letter that we are going to have a newspaper started here soon. The press and materials are already shipped, and will shortly be here. It will be a first class paper, ably conducted, and the job printing department will be second to none in the territory. But you will hear more of it when it comes. Town lots are I good demand, at reasonable prices, and notwithstanding the difficulties we have to contend with in the way of scarcity of lumber, new buildings are continually going up. Como was commenced right, is being built up right; and will be the model city of the Territory. But what is the Territorial Legislature about? They are talking of indiscriminately taxing the mines. Well, they hadn't better do that, it won't work. They must have some regard for the opinion of the public on that point, so emphatically expressed at the late election. They must be crazy. Yea, verily, "they whom the Gods would destroy, they first make mad." And such demented legislation as that will have the effect of causing a disruption of the Capital. It will sooner or later have to be removed from Carson to Como, where the balmy breezes among the waving pines, and the pure mountain air, may cleanse and purify the legislative brain, so that they may at length be able to appreciate, see, and consult more fully the best interests of our rich and thriving young Territory. A.D. 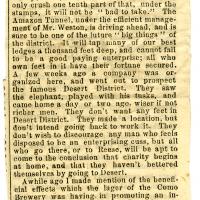