The Como Mill, and why it Stopped.

VIRGINIA DAILY UNION:--Como still continues rolling on, and takes the rest of the world along with it; but things have not gone exactly to suit us of late. We had indulged in great expectations of being able to tell you lots in regard to the big yield of our ledges here, under the stamps of the new mill; but just about the time we got ready to toot our horn, the aforesaid mill stopped running—just naturally and surreptitiously "dried up"—and it still continues in that same unhappy condition up to the present date. Yea, verily, "now is the winter of our discontent." But what made the mill stop? I noticed an article in the UNION of the 10th inst., in which a difficulty is spoken of as existing between the mill owners and Mr. Mette, the superintendent, and the cause of the present stoppage attributed to that. Being pretty well posted in regard to the affair, I will tell you what I know, in simple justice to all parties. When the mill first arrived here, we received it was a grand flourish of base-drum and fife, and destruction of lager. We said, "bully for the mill, we're all right now," and laying down our shovels and picks, just quietly waited for the completion of the mill which was to grind out our eternal fortunes. But as that happy period approached, Mr. Mette began to look about him rather anxiously for rock to crush. We told him not to fret, we had millions of it, rich as cheese, and enough to keep his rattle trap going through all future ages. Mette thought that all very fine; in fact, so fine that he "couldn't see it." He told us the mill would be ready to crush our rock before we had any on hand worth crushing. But, bah! We told him our ledges were all rich, and would pay from the surface down. In due time the mill was finished, and we supplied him plentifully with our fine surface rock. The whistle sounded—

Smash went the stamps, round went the pans—

"Were ever folks so glad."

We all felt jolly. We consumed much lager on the auspicious occasion, and the Como Brewery "stood the draft" gallantly. We saw our rock going through the mill with the most contented satisfaction. We felt already rich. But in a few days "a change came o'er the spirit of our dream." Our surface rock didn't pay as we expected it to do. Mette said: "I told you so!" We 'saw the point,' then. We agitatedly looked about us for the rich rock wherewith to feed the craving battery. Good ledges were all around us, but could our shallow prospecting holes and shafts be called "mines?" Even the Monte Cristo failed to give the big results which were anticipated, although it paid well considering that the shaft was only twenty-five feet in depth. Limited quantities of rich rock from some of the deep shafts were produced, but not a mine in the district was in condition and prepared to supply the mill regularly. Therefore, in view of all these things, the fires went down, the steam dried up, and the Superintendent allowed the mill to cool off for a week or two; it having run just long enough to try some of our rock and prove to us that our mines will pay well. We think we are ready now, and able to supply that mill with all the rock it can smash forevermore; and we shall do so, whenever it starts up again.

Meanwhile, the mill changes hands. That is to say, certain parties have leased it, and yesterday took an inventory of everything connected therewith, preparatory to starting it again in a few days.

I have endeavored to show that it was our fault, and not that of the mill, that it had to stop for the present. And now, in regard to the Superintendent, Mr. Mette: As the present state of affairs has given rise to various reports of a nature calculated to work injury and throw blame where it is hardly deserved, I will endeavor to correct the error, in simple justice to Mr. Mette, and try to "render unto Caesar that which belongs to Caesar."

This mill is owned by an incorporated Company in San Francisco, composed of men who, it appears, hold the almighty dollar in high esteem, and who never part with it from their reluctant grasp without giving the eagle a severe squeeze, and then straining their eyes to see where it goes to. From the commencement of the mill down to the present time they have subjected all the acts and doings of the Superintendent to the severest scrutiny, often finding fault where justly none should be found, and, by withholding the necessary funds at times, have cramped and impeded his operations. When the mill stopped, they concluded Mr. Mette must be altogether to blame, and accordingly sent a committee of three up here to investigate the matter, composed of men whose experience in milling affairs seems very limited, and who evidently know more about coffee mills than they do about quartz mills. They came; and judiciously, according to their own idea, finding what fault they could, reported accordingly. Of course Mette received from headquarters letters full of censure; in fact some of them really quite insulting; and he, as an upright business man, conscious of having performed his duty faithfully, to the best interests of the Company at all times, properly resented it. He immediately invited a committee of five of our most responsible business men to examine into his affairs generally, and they, being men of sound judgment and experience in such matters, found everything all correct and as it should be on the part of Mr. Mette; but they also found, by means of the accounts, and the letters which he had received from headquarters, how meanly he had been dealt with. He had conducted everything on the most economical scale, in order to suit his employers, and they in return, on their side, used towards him the most rigid and illiberal economy, amounting in many instances to miserly parsimony. But then, you know, it is said that "a corporation has no soul," which is certainly true in this case at least. Mr. Mette has also been accused of waste, by disappointed parties here, in town, and the "tailings" of the mill were reported to be very rich. The San Francisco committee of investigation found a loss in the quicksilver of half a pound to each ton of the rock crushed, which all mill men will say is less than the average; and Mr. Beliard, of this town, a gentleman of great experience in mining matters, tested a quantity of the tailings, at the request of Mr. Mette, and found but a mere trifle of the precious metal. Considering the newness of the mill, and the inexperience of all parties in the working of the rock of this district, so little waste is really surprising. Excuse me for occupying so much of your space on this subject; but the stoppage of this mill is prejudicial to all concerned, and the public should know the true reasons. I believe in justice. "Give the Devil his due." Two more mills are contracted for and are coming here soon. One, of forty stamps, is coming for the Whitman mine, and the other is to be moved over here from Grass Valley, Cal.

Many strangers are coming here every day, and we are improving fast—having dog fights, man fights and religious exercises every Sunday. We hope soon to arrive at the dignity and importance of a "man for breakfast." Como will be heard of yet. And then, too, we are to have a newspaper—a weekly. The money is raised and the press and materials sent for. J. A. Andrews has been appointed constable for this district, and commenced the duties of his office by the arrest of old "Pap" Huse for assault and battery. We have considerable business in the law line, before Justice T. W. Penney, so that the Constable finds some employment. Mr. Andrews makes an efficient officer.

The great Amazon tunnel, which is to tap the best ledges of this district at a great depth, is now commenced and will be pushed forward with energy. It will be amply large, and is designed for a single track, with the necessary switches. The Amazon ledge, belonging to the company, is a fine one, well developed, and from six to ten feet thick. It assays rich, and the tunnel will tap it 400 feet below the surface. Very rich ore, within the last few days, has come out of the Rappahannock, and also from the Monte Cristo. One could hardly ask anything richer. A. D. 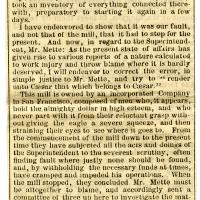