VIRGINIA DAILY UNION: A pleasanter day than was yesterday, here in Como, is rarely to be seen, and was just such a day as Christmas day always should be. The town being situated on a warm sunny slope, our cheerful streets presented a genial contrast to the cold, snow covered slopes and hillsides, whose faces are inclined to the north.

Several gay cavaliers, with their fair ladies by their side, seated in fine buggies, on a Christmas visit to the place, dashed up and down the streets, visiting the mill and other points of interest. The day before Christmas our citizens assisted in raising a splendid flag staff over the National Hotel, and, amid rousing cheers, the glorious old starry flag of the American Union was set floating in the breeze; "Rally round the Flag," and the "Star Spangled Banner," were then sung, and the jollity of the occasion wound up with numerous horns of Cross's "best." Glory to that proud banner; a more beautiful flag never floated in the sunlight of heaven' "long may it wave."

Christmas Eve was celebrated by a grand ball. The first "Annual Ball," for we intend to have one just like it every Christmas from now henceforth through all future ages. Truly it was a grand affair, and pronounced by all who were fortunate enough to be "thar," the best ball ever gotten up in this Territory. Well, anyhow, it couldn't be beat. There were some thirty ladies present, including several from Dayton and elsewhere, and all of them good looking, none of them being at all homely. The men of Como were in clover for the time being, and all hands joined heartily in the "gay and festive" scene, with a zest hardly to be equaled. In fact, I never saw anything of the kind, where all the participants seemed so thoroughly to enjoy the festivities of the occasion. The weather was fine, the accommodation perfect, and nothing occurred to mar in the least the pleasures of all concerned. The music was by the Como Quadrille Band; a combination of talent not often to be met with in this sage brush country, and the ball was held in Cross's new hall, in the third story of the National Hotel, which building, with all its perfect and elaborate accommodation, was placed at the disposal of the gay company. At midnight, all hands partook of a grand supper, gotten up in Cross's best style. Nothing more need be said of it. It was "bully" and no mistake. It can't be beat nowhere. The ball was kept up with undiminished enjoyment until about daylight next morning, and was a most decided success in every point.

I had nearly forgotten to mention that, in the evening, before the ball commenced, there was a political meeting held at the Como Exchange, which was addressed by Judge Haydon, and F. M. Kennedy, Esq., of Dayton, and Dr. Ellis, of Carson. Of course the new Constitution for the embryo State of Nevada, was the grand subject of discussion; Haydon and Kennedy taking the right loyal Union, sound, patriotic side; while Ellis discussed it in the light in which the Copperheads view it. Which side made the most convert, will be seen about the next election day. Another meeting was held this afternoon at Cross's Hall, which was addressed by F. H. Kennedy, Hon. William H. Virden, and G. A. Brier, Esq., of this town. Four delegates were chosen to attend the Union County Convention, to be held at Dayton on the 29th instant, viz: J. S. Crossman, Wm. H. Virden, G. W. Walton, and Alfred Doten. On the evening stage from Dayton, Judge Williams arrived, and will address the citizens here to-morrow forenoon.

This evening Bryant and Case's minstrels performed at Cross's Hall, to a very full audience. This troupe comprises much fine talent, and their performance was much applauded by their delighted audience. They deserve crowded houses, and will draw then, wherever they may go. The performance was concluded, by the appearance of "Martin," the celebrated "wizard," who gave us specimens of his wonderful powers as magician and ventriloquist. He is closely allied to the old gentleman with the cloven feet.

Last Monday we had a small picnic party at White point, about two miles out from town, near the new Whitman road. Several of the ladies and gentlemen of Como took advantage of the fine warm day, and enjoyed a pleasant little time. By special invitation your correspondent composed one of the party, and enjoyed it as much as anybody—at least he thinks so. The road winds on an even grade around the hill sides, among the shady pines, and is quite a romantic little walk or drive. All of us, however, preferred walking. The romance and interest of the scene was not a little heightened by a comical looking turn-out, in the shape of a couple of long-eared, sober-sided jackasses, which were hitched "tandem" to a cart, and driven by three little boys. This "team" transported the eatables, &c., and preceded the expedition to the place selected for the picnic, which was a small shady grove, near the far-famed White Point ledge. The weather was highly propitious, and all enjoyed the pleasures of the occasion to the fullest extent, even to one poor melancholy young man, who mounted a tall rock, at the imminent risk of his pantaloons, and sitting astraddle thereon, poured forth his doleful feelings in the strains of a plaintive flute, which he had brought along in his pocket for the purpose. We took a small survey of the mining operations at that point, which are as yet rather limited, the ledge being but recently discovered. The Crossman Company is the original location on the ledge. In the cut they are running into the ledge they find some very good ore. The Lee and Weston, the first north extension, have run in with their tunnel some thirty-five feet, and have struck splendid looking rock, as has also the Roberts Company in their tunnel, which is in only some 15 or 20 feet. After eating up most of the eatables and taking a survey of the wealth and romantic scenery of the place for an hour or so, the party returned to town, well pleased with their picnic.

On that day also the first wedding of the District came off at Palmyra. We had not the pleasure of being present on the interesting occasion, but we had the felicity of enjoying a piece of the wedding cake. Joy be ever with the happy pair, and may the sunshine of their wedded happiness be ever unclouded.

The "Live Oak" is a claim lately incorporated, and which promises to be one of the most important claims in the district. It is located near the mill, on the George Law ledges, Nos. 1, 2, and 3. The tunnel will strike all three of these ledges at from 150 to 200 feet below the surface, and from the mouth of the tunnel a track can be laid directly to the mill, thus saving a considerable item in the way of transportation. The tunnel will also probably strike considerable of a stream of water, which will be very valuable of itself as a mill privilege.

The proprietors of the Live Oak are poor, hard-working men, willing to go on and develop the claim and bring forth its long-hidden treasures for the benefit of the world, but they don't want their mine taxed until they can get out some silver to pay the taxes with. They are told that that mining taxation clause in the Constitution don't mean anything, and even if it did, the Legislature has all the power, and will fix the thing all right. Such being the case, they think the Convention must have been fooling away their time when they got up that clause. They had better left it to the Legislature and said nothing about it. A. D. 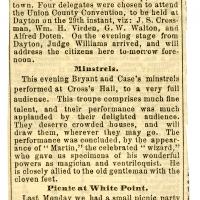