[Correspondence of the Virginia Daily Union.]

WAITING FOR SOMETHING TO TURN UP.

Micawber was the man, you recollect, that was always waiting for something to "turn up." No, there are a great many of the genus Micawber here in this district, who are eternally waiting and watching in ever anxious expectancy of something new to "turn up," and these last few days they have been gratified quite often, for stirring events are casting their shadows before, and "every day brings something new" in the shape of onward progression and improvement.

A few evenings ago, two men who had been partaking freely of numerous belligerent cocktails, got into a friendly quarrel at the supper table, which resulted in one of them producing a five shooter and blazing away across the table at the other. The muzzle of the pistol being only some four or five feet from the bridge of his nose, at point blank range, he would have been killed, dead as a hammer, had it not been for the steward, who sprang forward and turned up the muzzle of the weapon, just in time, the ball passing up through the ceiling. Of course, the man with the pistol was quickly and roughly hustled out of doors, but his friend, just quietly went on eating, as though nothing had happened, merely remarking something about a "poor shot," etc. He coolly finished his supper, and didn't get his mad up until he got through picking his teeth. He then waxed somewhat profane, but forgave his friend on the score than he "must have been crazy when he shot off the pistol." He was about as cool a man as I ever saw. These men were just arrived in town, from California, but some of the Comoites took item on the occasion, and for a day or two afterwards, whenever they got into a quarrel, out came their pistols; but no one has been shot yet, although, if we only keep on in the same ratio of improvement, we shall be able yet to brag of a "man for breakfast," just like you Virginia folks. When we shall have attained that point of perfection, I hope the next improvement introduced will be a vigilance committee.

The new assaying and refining establishment of L. Solomon is now completed, and in full blast. He is fully prepared to make all sorts of assays and chemical tests, at reasonable rates. He has three splendid furnaces; one for cupelling, one for chemical operations and experiments, and the other for melting purposes, in which he can melt half a ton of bullion per day. It is a very creditable establishment for this or any other place. Mr. Solomon is a gentleman, and fully understands his business. He is assisted by his son, and can hardly fail to do well here. He has made assays of the rock from but few claims as yet, but he finds the rock generally much richer than he had expected. I understand he is to have the supervision of the first crushings of the mill, in order that the best method of working the rock of this district may be sooner found out.

The wires of the California State Telegraph are now extended to this place, and the poles are nearly all erected between here and Dayton. It will soon be all completed, and an office established here, enabling Como to chat with her elder sister, Virginia, as though they were sitting side by side. Our brokers can post you every ten minutes as to the price of feet in the Montezuma, and your brokers can post us in regard to the Comstock; and should the bloodthirsty Pi-Utes ever take a notion again to make a descent upon Como, we will have no difficulty in calling assistance. This telegraph is a capital arrangement.

When the National Hotel was completed, some three weeks ago, many said it was too large; too fine a building for the place; in fact, altogether ahead of the times; but that was a mistake, for so many strangers have come in lately that the house is full; and, in fact, Cross has had to turn away many, but he is extending his arrangements so as to be able to accommodate all who give his well known hospitalities the preference. But then we are pretty well off now in the way of stopping places for the weary and hungry traveler, for, besides the National, and Daniel's Hotel, we have the Pioneer Restaurant, kept by F. Hampel & Co., the accommodations of which are very superior. Their beds are A No. 1, the grub "esta buena"—especially those fine porter house steaks which they get from the butcher shop next door. They get their lager from the Como brewery. Of the French Restaurant of Mons. Beliard, I need not speak. Mons. Beliard has his family with him; he is at home; and all who eat at his house, find themselves at home, and in the enjoyment of such a meal as can only be found at just such a place. It is a French restaurant.

Some little excitement was created in town to-day, by the title to some half dozen of the blocks in the center of the town being called into question. Certain parties claim to have located a mill site there, prior to the survey of the town site, and how, by virtue of said location, claim the ground, and to-day served the preliminary papers of an ejectment suit, claiming possession of the ground, and twenty-five thousand dollars damages. It comprises quite an extent of valuable buildings and property, and will be well contested. Well, lawsuit goes—business for the lawyers—go in—don't care which whips—don't own an inch of it.

Yesterday I took a stroll over to the Sonora ledge, about a mile and a half southeast of town. The Sonora is a fine ledge, running nearly north and south, and is esteemed among the best ledges in the district. The shaft of McDowell & Co., at the depth of fifty feet, struck water, and the rock at that depth, shows rich in chloride and bromide of silver, as well as plenty of gold. Feet in that claim are not for sale. The Eureka claim, on the same ledge, struck water at the depth of fifteen feet, and they will have to erect steam pumping apparatus for keeping their shaft free of water. It is a very valuable claim, and the owners of it have a large fortune before them. All they have to do is to "go in and win." It is a splendid location. Near the ledge is a large flowing spring of the best water, enough to run two or three mills. Mr. McDowell has secured a large mill site here, which is very valuable—perhaps the best in the district, with an abundance of wood in the vicinity, enough to last for years to come. A. D. 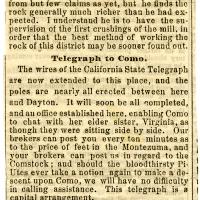