VIRGINIA DAILY UNION:--Prominent among the notabilities of Como, is the Stone Saloon, kept by that great disciple and expounder of the black art known throughout the Pacific portion of Uncle Sam's dominion as "Martin the Wizard." This fine saloon is the place where Como-ites congregate together, and spend their leisure time smoking, playing cards, or reading the latest news and discussing the most important topics of public interest. Dealers in mining stocks here meet each other, and many is the big trade in "feet" consummated over a glass or so of the Wizard's "best." Here, also, meet the staunch old topers of the district, and warm up their jolly red noses with a small drop of good whisky, or fine old cognac. The saloon is fitted up in elegant style, regardless of expense, but the greatest attraction is the Wizard himself. Always the same genial, pleasing, and affable gentleman, ever ready with his mirth-provoking eccentricities and happy jokes, he has become one of the pets and fixtures of Como. He came here, in the course of his travels, some three months ago, and becoming smitten with the beauties of the place, and with the fine prospects of wealth which lay before him, he concluded to give up the show business, and has invested his "pile" here. He, of course, is now heavily interested in "feet," and one rich claim, in which he owns a large share, is called in honor of himself the Wizard claim. It is on the Floridian ledge, and assays very rich. But notwithstanding that he has quit the show business, he still maintains his connection with old Beelzebub, who, through the instrumentality of the "inexhaustible bottle," keeps the bar well stocked with choice liquors. Martin gets up one marvelous drink, called

It is a mysterious compound, of various remarkable elements. He puts in a little of the nectar of Jupiter, with some ambrosia of Venus, a drop or two of the oil of Joy, a little of the essence of Contentment, and a quantity of the spirits of Good Fellowship. He gives it a shake up together, and with a peculiarly magical "turn of the wrist" he sets this wonderful drink before his customers. Sparkles of wit and humor dance within it, and the cream of a joke covers the surface as the glorious beverage bathes the lips of the devotees at the shrine of Bacchus. The effect of this marvelous drink are truly remarkable. The other day

accidentally met in the Wizard saloon. Hate and blood-thirsty rage gleamed from their flashing eyes. They had longed for this meeting, and now were ready to tear each other's hearts out in deadly, unyielding strife; but preparatory to leaving this world in bloody embrace, the singular idea occurred to them of taking a last drink together. The Wizard concentrated all his magic powers in the preparation of a most superhuman cocktail. With knives and pistols drawn, they drank each other a speedy passage into eternity. They smacked their lips; they wiped their mouths; they got to telling funny stories; pawned their weapons for more cocktails, and got jolly tight. That night they slept together like brothers, under the same blanket, and are now sworn friends forever. To appreciate the whole story, however, people should give the Wizard a call.

But joking aside, Como still continues rapidly to improve in size and population; and the public mind is every day kept in a continual state of excitement by newer and richer discoveries, as the numerous rich leads become more and more developed. I have spoken, in my former letters, of the various ledges most noted here, and told you what is known of their richness; now, in support of it, I must mention

THE ASSAYS OF MR. JOHN ROGERS,

a practical and highly talented assayer residing here, who has been for the last two months engaged in assaying the different ledges. He has very quietly assayed the Minerva, Shiloh, Monte Cristo, Wagram, Rey del Monte, Kremlin, Montgomery, Floridian, Montezuma, Rappahannock, and some dozen other ledges, all of which assayed well; some of them assaying as high as eight hundred dollars to the ton, in gold and silver. Most of them assayed four and five hundred, and the poorest fifty dollars to the ton. But the reality of all this he showed me in the shape of any quantity of big buttons of the bullion itself, some pieces weighing as high as three ounces. The most rock he tested from any one ledge was twenty-four pounds. He had to crush all these tests in a hand mortar—a most laborious process—and he is deserving of much credit for the untiring industry with which he has accomplished such rich results. For the satisfaction of the incredulous, I refer them to Mr. Rogers himself, who can show them the richness of the district in a tangible form, and for a fair compensation, will inform them as to the assay of each ledge; and his statements may be confidently relied upon. He has also a piece of rock from one of the ledges, which he submitted to the action of heat, until the silver was fused, and now remains all over the outside in the shape of round globules, of the size of goose shot. Such rock would pay two and three thousand dollars to the ton.

People who are inclined to rush blindly to the far off regions of Reese River or Humboldt, should open their eyes, and consider whether they may not find richer and more substantial mines near home. Just let them come here and take a fair examination, and they must be hopelessly stupid, if they cannot see and appreciate the real value of this flourishing district. A. D. 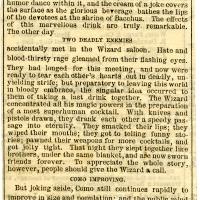