VIRGINIA DAILY UNION: The clouds of war have now blown over; the forces have retired from the field, and a calm succeeds the political tempest. Secesh and Copperheads were very few in your neighborhood compared with what they were here, therefore you were all right. They were very plenty here, and on election day ran us pretty sharp, as you saw by the returns, but it was a "draw game" between us, we electing some of their candidates and they electing some of theirs. The thing will never happen again, however; for, although this district has been heretofore noted for its secesh proclivities, yet there are too many Union men coming in now. Copperheads will have to drop back into their coils, or wriggle off into the sage brush, out of the way. They are "played out." They did not see it, though, before the election, but knowing their strength here they confidently put forth their votive powers in a highly spirited manner, evidently under the fond delusion that "as goes Como so goes the world." Indeed, so confident were they that secesh and Copperhead would carry the entire Territory that in the evening, while the votes were being counted, they talked freely and officially of their future plans. In fact, one jubilant individual, as soon as he ascertained that he was some dozen votes or so ahead of his opponent, took all the boys down to the Como House and stood treat to several rounds of Barrett's best, perfectly reckless as to the expense, privately informing several as to how he was going to have his plans carried out in regard to public improvements, when he should have entered upon the duties of his office. He spoke forgivingly of his opponent—admitted that he was "a d---d good feller," but not "good enough for the office—the people knew that, therefore wouldn't vote for him; to be sure he might get a few votes in Silver City and a few in Dayton, but h—ll, that warn't nothing; couldn't possibly be elected; no show; let's have another drink." One aspirant for legislative honors also felt quite jolly except that he was "all right" as far as his own precinct was concerned, and therefore surely the other precincts wouldn't "throw off" on him; no danger of that; couldn't be done; got too many friends." But, alas! For the doomed. The arrival of the stage next day brought the news that treason and Copperheadism were made to bow, everywhere, low in the dust before the triumphant march of the true loyal sons of the Republic of the Starry Banner. What an amusing contrast. Merrily twinkled the eyes of the "elect." Pendant hung the lower jaws of the disappointed. Long faces wore the passengers for "Salt River," as they silently stepped on board the boat. Blistered hands have they now, as they pull at the oars, toiling up that stream, where many an illustrious passenger has preceded them, and where many more must go. Farewell! Don't come back until having eaten prodigally of the husks of repentance, ye may resolve to turn from the error of your ways, and crawling no longer on your political bellies as copperheads, arise and take a place in ranks of the faithful; those who have no "North" and no "South," but go in for the best interests of the whole country, the Government, and the Union, "right or wrong." But never fear; sensible men will think; and their eyes will become opened to the light. Copperheadism has received a rebuke that it will remember; and as far as Como, politically, is concerned, you will never hear of anything else than a Union majority in all public elections, from now henceforward.

The one great reason why Secesh and Copperheads have been so numerous in this District heretofore, is because of the absence of female society; it being a stereotyped fact that the ladies are all for the Union—"to a man." But within the past few weeks many ladies have found their way hither. About all of them, however, are married, there being only about one marriageable Miss in the district. She is for the "Union," and is a "belle" without a rival.

The superintendent of the mill says it will be completed and ready to start in six weeks, but although we have only one quartz mill here as yet, we can boast of nine whisky mills, all in full blast with some half a dozen others in process of erection. When they all get to running, we shall be able to crush something, if it be nothing more than men's souls.

Daniel's new hotel opened a few days ago, and he is doing a thriving business. Mons. Belliard has also opened a French restaurant and boarding house. Mr. Cross is building a fine, large first class hotel, which when completed, will, probably, be the "crack hotel" of the place. Of the mines I need not speak. They show for themselves, and will yet astonish outsiders with their richness. The Shiloh, Monte Cristo, Minerva, Orizaba and Independence, are a few only among the "coming" Comstocks of this district, as we will show you in a few weeks when the mill starts. The Shiloh has always assayed "big," and if it pays under the stamps only one tenth part as well as it assays, it will be a very rich institution. A new claim now about being incorporated, the Dacotah, also turns out rick that cannot fail to prove very rich. A.D. 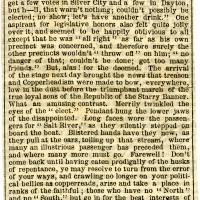