VIRGINIA DAILY UNION:—Last evening the quiet of our little city was broken by the sound of a hand-bell of the Como House traveling up and down street, and calling a meeting at Sacramento Hall. Of course your correspondent joined in the rush, and managed to squeeze in without any difficulty, for there was plenty of room. Mounted on the rostrum, and pouring forth his eloquence, was J. Blackford of Dayton, candidate for the assembly, who came up here this evening to demolish the Union party and its nominees, and to stop everybody from voting for any one but himself for the Assembly.

His audience was composed of some of our good old staunch Copperheads, a few bogus Union men and some few of the true loyal stripe, about equal quantities of each—a jolly mixture. Blackford told all about what we have so often read and heard before—the origin and progress of slavery in America—and followed it down to the present time. He pitched into the rabid Abolitionists of the North, and the Secessionists of the South; and said that Crittenden would have saved the Union if his "compromise" had been adopted. But no; there must be fighting done, blood shed, the whole nation must be plunged into a bloody war, and "farms for every one of ye, away down there" in the South, was the inducement held out to Union soldiers to fight for. He denounced the South for seceding, and trying to break up the Union, and was not in favor of fighting her and punishing her until "she shall once more acknowledge the supremacy of the Government." Lincoln was naturally a good man, but his principles had become depraved by the set of evil counselors he had about him. R. E. Trask, his (Blackford's) opponent for the Assembly was naturally a good man in his way, but the mob spirit was rife within him. Trask was decidedly in favor of suppressing treasonable newspapers, by force, if necessary, instead of leaving it for others to do; therefore, Trask and "them other fellers" that were nominated by the Union Convention at Dayton, wouldn’t do to vote for. He told Dad Vestal’s story, about the "sheep," illustrating that "them other fellers" that were nominated with Trask, were in "dam bad company." He represented to us the danger there was, that the Abolition party might eventually get the power, and crush us all under foot without benefit of the clergy, and then he told us the stale, but funny old story about the "feller and the girl" and her "agility." The speaker then drew his remarks to a close, having effectually squelched the Union party, league and all. But he must be electioneering for Trask and "them other fellers," for he has secured their election, as far as Como is concerned, even allowing that it was not safe enough before. S. R. Belden, Esq., President of the meeting, being now loudly called upon, got up and said it was no use for him to try to speak after their listening to the eloquence of the preceding orator. He was "something like a scrub mustang, brought out to trot against a fine stallion" —"couldn’t do it." T. W. Penny, Esq., Vice President, excused himself on the grounds that he was no orator, but an excellent worker. McCumber, candidate for Road Supervisor, couldn’t be induced to speak at all, so the meeting had to adjourn. A. D. 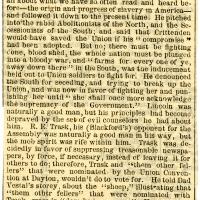