VIRGINIA DAILY UNION: —Last evening we had a political meeting, which was quite a spirited affair for Como, or any other place. The unconditional Union forces were assembled—ladies and all—to hear the grand principles of true, loyal Democracy expounded, and to see the various Union candidates "trotted out" before them.

F. H. Kennedy, of Dayton, candidate for the Constitutional Convention, first took the stand, and addressed the meeting in a speech of some length; he explained to us what a "copperhead" is, ripped up the platform of the so-called "Peace Democracy," and pitched into that delectable party with a perfect looseness. He quoted the death-bed remarks of the lamented Stephen A. Douglas, shouldered the whole blame of the present bloody war upon the imbecile old bachelor, James Buchanan, held up each plank of the true, loyal, unconditional Union platform to our view, and showed us the soundness of the material of which it is composed; on it he was willing to stand or fall. His remarks were well received.

Mr. Gates, of Dayton, candidate for District Attorney, followed with a capital good speech, remarkable for its energetic clearness and soundness of sentiment. His felicitous remarks and happy illustrations were much applauded, and what few copperheads were within reach, writhed beneath his stinging lash. W. H. Virden, of this town, candidate for the Constitutional Convention, then made a short speech, defining his position and giving us his sentiments, which were of the perfectly sound order. R. E. Trask, of Dayton, candidate for the Assembly, made a right loyal, common-sense speech, endorsing the Administration and all its acts, which was received with much applause. G. A. Bier, of this town, candidate for Road Supervisor, being now loudly called for, mounted the stand, and gave us a speech in his own peculiar style, explaining how he will mend our ways, in case he is elected; and how he is "Union" from his heels to the top of his head. (Six feet two inches.) His spirited remarks were happily received, and wound up the meeting with a grand flourish. A. D. 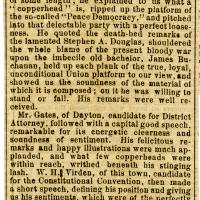